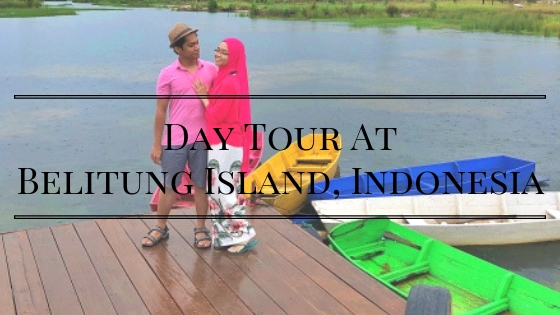 This island has so many to offer for literary fans, foodies, beach-goers and historical fans alike. If you’re one who falls into any one or all of these categories, then book your next plane ticket!

How about a half day tour at Belitung Island?

My starting point was from the hotel I was staying in: Golden Tulip Essential in Tanjung Pandan. We went to 5 different locations at the East and West of Belitung Island which took us half a day to cover (not including food stops).

Vihara Dewi Kwan In Temple is one of the oldest Buddhist temple in Belitung Island, Indonesia. Located on a hill at Burung Mandi, you can actually see the Burung Mandi Beach from nearby the Kwan In statue up the hill.

The temple itself are well taken care of and still used by worshippers throughout the year. I love all the colourful stairs and pagodas here, which are very instaworthy. However, please behave when you’re here as it is a place of worship.

Only 10 minutes away from the hilltop of Vihara Dewi Kwan In Temple, it would be a real waste not to stop by at Burung Mandi Beach and take a deep breath of the ocean.

The sands here are brown and soft, many coconut trees and gazebos around. There weren’t many tourists around, or maybe it was because we came on a weekday. We were told that locals love coming here in the weekend with family. Take some time to walk along the beach and the jetty. It would be a great place to take photos. However, be careful of the strong waves.

I love seeing the traditional colourful fishermen boats too. They are called the Kater.

Fondly called as Ahok, or his full name, Basuki Tjahaja Purnama was born in 1966 in Manggar, Belitung and is an Indonesian politician. He was also the former Governor of Jakarta.

On May 2017, Ahok was sentenced to two years in prison by North Jakarta District Court on grounds that he was found guilty of blasphemy and inciting violence. It was a test of religious tolerance and free speech in Indonesia which gained interest internationally. On 24th January 2019, he was released from jail.

“Kampoeng Ahok” was a dedication to Ahok by the people of Belitung Island. Many of his portraits can be seen here and many souvenirs are being sold to tourists as well.

Dermaga Kirana is a relatively new attraction in Belitung Island but has been attracting many local and international visitors alike. In English, Dermaga means Dock and there is also a mini harbour nearby with colourful sampans – a very pretty place to hang out with friends and family members or even take some photos, especially during sunset.

Made out of rattan, the “houses” are in the shapes of snail shells (or half snail shells, come to think of it). This design turned it into a comfortable open space, airy and allows enough sunlight to come in without you sweating as you sit inside.

It was a little sad that it started to rain when we arrived at Dermaga Kirana so the sky was dark and there were many ripples in the water. We didn’t get to take many photos though due to this but the cool wind was welcomed by us.

Oh, Dermaga Kirana is located opposite of SD Muhammadiyah, Laskar Pelangi Replica School so if you ever made your way here, hop on to the opposite side and enjoy the replica school together with your friends!

In English, Danau is translated as Lake. Once a mining area, Danau Kaolin is now a “retired” mining lake, famous for it’s light blue-green waters and white mineral deposits.

Kaolin is actually a clay mineral or a layered silicate mineral that is soft and white which is used for making porcelain and china, as filler in paper and textiles and as medicinal absorbents.

Visiting the Danau Kaolin, we can only stand behind the barriers and it is prohibited to walk in to the Danau because it could be unsafe. So you can only get some photo opportunities here before heading back to your hotel or other destinations – like what my friends and I did!

Make Danau Kaolin your last destination of your half day tour of Belitung Island before heading back to your hotel (or to the airport).

18 thoughts on “Half Day Tour At Belitung Island, Indonesia”