It was a beautiful sunny morning that 29th March, 2017 when Black Eagles Korea did the final flypast at Petronas Twin Towers KLCC.

I received the invite to the private media event only a day before that with information of the flypast. It was quite a last minute thing and I wasn’t quick enough to RSVP for the private event, sadly. I wasn’t going to pass up the opportunity to witness the flypast though, since I missed attending LIMA 2017 (Langkawi International Maritime and Aerospace) the week before.

Even at LIMA 2017, the Black Eagles aerobatic team of Republic of Korea Air Force (ROKAF) was a hit. Everybody wanted to take photos with the team, and it was no wonder – with their black suits, it looked like they just came out of a movie scene. Not forgetting to mention the unique and difficult manouvers they did in Langkawi including the famous Yin and Yang outline in the sky.

In celebrating years of friendship, trade, cooperation and cultural exchanges with Malaysians, the Malaysian Government has allowed Black Eagles to conduct a flypast. On noon 28th March, medias received notification that the Black Eagles will make a Flypast near KLCC for 15 minutes the next day before continuing to their base in Wonju AB, Gangwon Province Garrison, South Korea.

Eight (8) of the team’s sleek KAI T-50B Supersonic jets, coloured black, white and yellow made an appearance at 10.45am. The sound those T-50 jets made when they flew past was incredible – and what else can you expect from a 13.4 meters long jet that travels up to a speed of MACH 1.5?

Even if you are not a fan of supersonic jets, you could not deny the precision of the aerobatic performances. 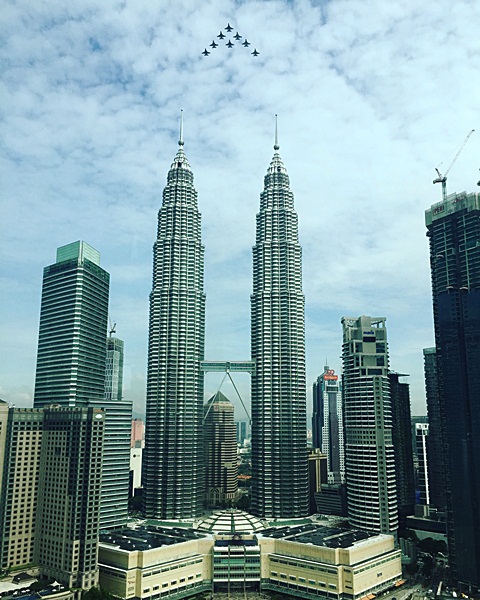 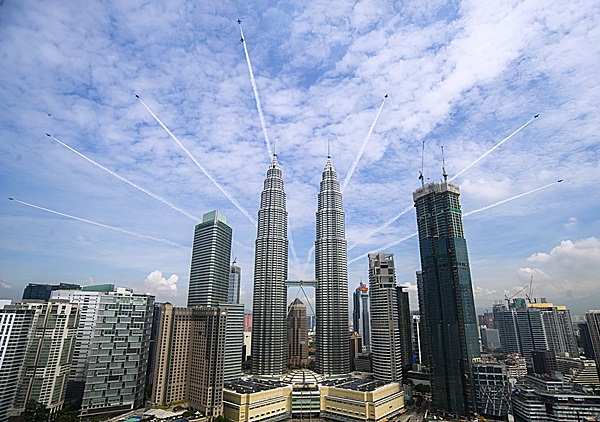 Led by team leader, Major Lee Kyu-Won, they first flew past in between the KLCC Twin Towers before changing their point to somewhere next to Mandarin Oriental Hotel. However, the best was probably the finishing end where they spread out from each other on top of KLCC before flying to their final destination.

*Photos are from media group. Videos are my own.