It is KL Tower’s 20th Anniversary on the 1st of October. In conjunction with this auspicious day, KL Tower held a launch for the KL Tower International Jump 2016. In short; BASE Jump. 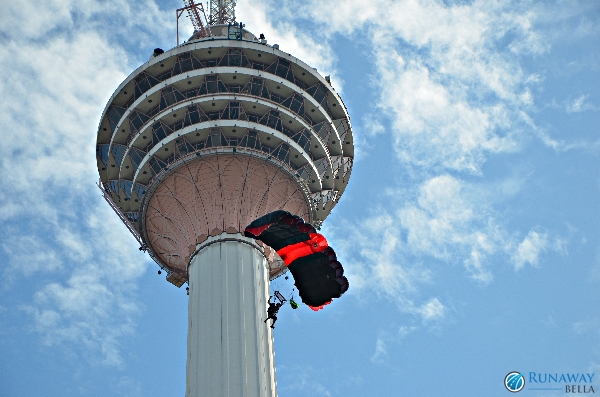 Being a fan of height-related sport, I didn’t give up the chance to join the launch and to witness the non-stop BASE jumping throughout the day. I had hoped to jump myself (or maybe tandem with a cute jumper) but I was told that tandem costs RM1,500! Oh how my hopes were squashed. It is quite pricey for me. So, I did the next best thing – sit on the ledge. At least I get the wind to blow my shawl.

The KL Tower International Jump 2016 was launched at KL Tower. We were lucky to have the Deputy Minister of Tourism and Culture herself, Datuk Mas Ermieyati to grace the event. She was accompanied by Datuk Rashidi, Deputy Secretary General of Ministry of Tourism and Culture and En Meor Shahril Anuar, the CEO of KL Tower Sdn Bhd. 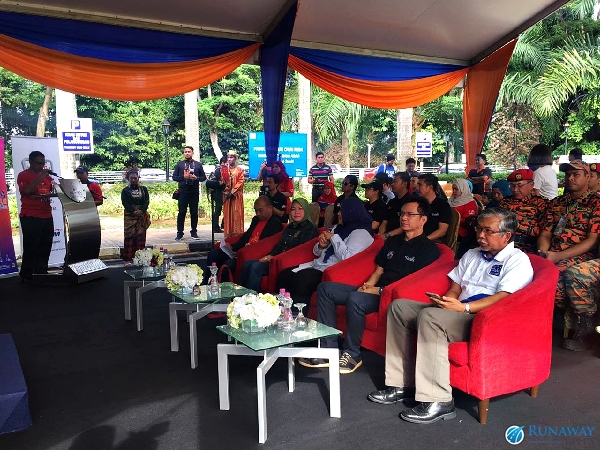 “The KL Tower International Jump 2016 is to bring families and friends to KL Tower. Visitors will be able to witness the activities throughout the period. Malaysia is the only country hosting such an event in Asia and hope it will be an annual event that will help boost tourism in Malaysia,” En Meor Shahril Anuar.

What was more interesting is when a total of 20 jumpers jumped one by one after Datuk Mas Ermieyati launched the event – with the help of an air horn. What a view. Blue sky and white clouds as KL Tower’s background, things were looking good! 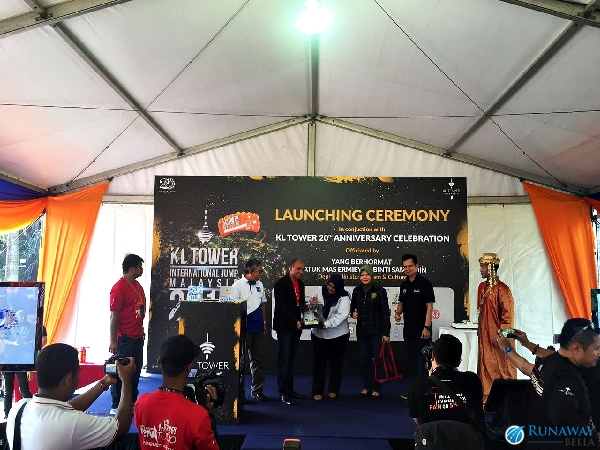 This was what happened last Saturday at the KL Tower International Jump 2016. The launch was officiated by Datuk Mas Ermieyati, Deputy Minister of Tourism and Culture, also to commemorate KL Tower’s 20th Anniversary. The event was held at the base of KL Tower. KL Tower International Jump 2016 has 121 BASE Jumpers from all around the world, including Malaysia. For more info, go to runawaybella.com #KLTower #BASEJump #KLTowerInternationalJump #MOTAC #NBOS #KualaLumpur #Sports #SportsEvent #Event #Malaysia #Travel #AboutKL #TourismMalaysia #TourismMalaysiaKL

Once the launch were wrapped up, we then proceeded to KL Tower’s view point.

The KL Tower International Jump 2016 brought a total of 121 BASE jumpers from all over the world. United States, United Kingdom, Australia, Japan, New Zealand, Denmark and even Malaysia, to name a few. All of these jumpers are experienced.

In order to apply, jumpers will have to complete at least 120 BASE jumps and 20 jumps within the last 12 months. Jumpers need to be active in BASE jumping for the past 2 years. The selection process are quite rigid.

You would really enjoy seeing the guys do stunts in the air. Some did somersaults, some jumped in Superman position, some even jumped backwards. Some opened their parachutes early and some opened when they’re really close to the ground. Nobody got stuck in any tree that day though. 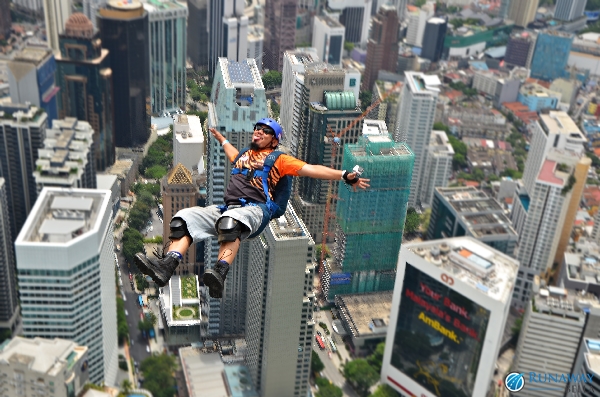 Was it fun? Luckily the weather was not too hot when I was at the ledge that day. So yeah, it was certainly fun.

Since I was already there, I went to Skybox too. There are two Skybox in KL Tower so make sure you go to both for good photography sessions with awesome views!

Squeezing myself right at the edge there. Why? Coz it’s fun! Plus, I had to pose for the camera and that angle is quite nice. LOL. Have any of you been to KL Tower’s Skybox? Entry tickets is RM75 (for MyKad holders) and RM105 (for non-Malaysians). The Skybox can hold up to 6 people at one time so if you’re a scaredy cat, you can force your friends to crawl into the box with you. But if you love heights like me, look down and enjoy the view! #KLTower #Skybox #KualaLumpur #TourismMalaysia #Malaysia #AboutKL #TourismMalaysiaKL #FunThingsToDoInKL #GoCrazy

Things BASE Jumpers Do

Apart from jumping, BASE jumpers will have to carry their heavy parachutes back up to KL Tower, fold them neatly and jump back out again. I’m sure the KORN music playing in the room helped a lot. Love the energy that they have too.

This is Carsten. Carsten Cooper-Jensen is from Denmark. When I took the picture above, it was only 11am. He told me he had jumped 4 times since that morning. But based on his excited look, he seemed very happy with what he does. I’m sure he didn’t see this as a task at all.

Luckily for us, the wind was very good that day. If the wind was too strong or rough, the jumpers might cancel their jump or risk hitting the tall buildings or get stuck in trees. This of course, is solely each jumpers’ decision to make.

There are only a small number of guys being tandem master for tandem jumps. Saw one girl did tandem that morning. I’m sure she had the time of her life.

How about you? Would you ever BASE jump?

29 thoughts on “BASE Jump at KL Tower International Jump 2016”