I read a quote that says, “Once a year, go some place you have never been before,” and even though my bank balance might not allow me to go to ALL the places I have listed below, I would love to go to at least two or three of these countries before the end of 2016. 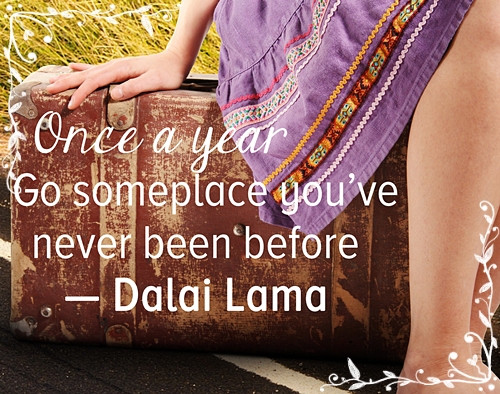 This is probably the only Asian country I absolutely need to visit this year. I have always loved Japan – through my reads, through stories shared by traveler friends and through photos I couldn’t stop browsing on the internet. I’m not much of a metropolis traveler and prefer the more quiet city or the more relaxing traveling and so, instead of Tokyo being my go-to city, I would rather go to Osaka.

Apart from Universal Studios Japan, I would love to go to the castles, the parks and the museums in Osaka.

However, one I would love more to do is to follow the Kumano Kodō, a series of ancient pilgrimage route which is still used until today for pilgrimage to Kumano Sanzan. Not forgetting to mention that the Kumano Kodō was also registered as a UNESCO World Heritage in 2004.

Catching the Aurora Borealis has always been in my bucketlist and now that I read the Northern Lights will start dimming next year, it is highly imperative for me to go to Iceland to catch it – as well as enjoy all the other beauties Iceland has to offer.

Black-sand beach? Blue Lagoon? Gullfoss? Where else can we find those if not in Iceland? Not forgetting to mention the volcanoes, mountains and rivers where I can do fly-fishing. I’ve never tried fly-fishing before, but I wouldn’t mind doing it in Iceland. Looking at all the photos online, Iceland seemed like a beautiful place with rough edges. It looked like an untamed place, which is something I absolutely adore.

Oh, when I think of France, there are so many places I would love to go and visit. Castles, museums, beaches, parks and gardens are things that I will not pass up if I ever step foot in France. Of course, there’s Paris and the first place I would go to is the Eiffel Tower but there’s also The Louvre, Arc De Triomphe, Basilica of the Sacred Heart and so many more. But there are other places in France, the less explored, that I am equally excited of as well.

Mer de Glace, the largest glacier in France is one of the special attraction in Chamonix and one I wouldn’t mind climbing and walking in. Walking at the Pont Du Gard Bridge in Nime, which is also a UNESCO World Heritage or kayaking and paragliding at the Verdon George Canyon in the Alpes De Haute province. Visiting the abbey, church and monastery at Saint Michel, Normandy as well as walking in the gardens of Chateau de Versailles would be a dream come true.

I can’t dive but I wouldn’t mind learning how to dive just so that I can dive in the beautiful clear blue water of Dos Ojos Cenote in Tulum. The cenote, with it’s stalactites (and bats too, for that matter) are absolutely gorgeous. There are quite a number of cenotes in Mexico and opens to clear blue water you can snorkel, dive and swim in.

Apart from diving and swimming, there are also archaeological sites that are worth visiting because of the grandness built by the ancient Mayans such as the Temple-Pyramids at Chichen Itza or the Temple Of Inscriptions in Palenque.

“It would be a travesty to visit Jordan and not swim in the Dead Sea,” someone said.

I couldn’t agree more. I would most definitely not pass up the opportunity to float for hours (and not feeling tired) in the Dead Sea. However, the Dead Sea is not the only place to visit in Jordan and now that Jordan is deemed safe, there are more places to explore and discover for travelers like myself.

Petra, the ancient Nabataean city has a view worth waking up early in the morning to and worth waiting until the sun sets and the moon rise high above the night sky. The beauty of this ancient city is surely to take your breath away and the tradition with which is still practiced – camel caravans and the tradition welcome to visitors – will also soften the most jaded of hearts.

The place that I would love to visit most in Poland would be Wieliczka and Bochnia Royal Salt Mines. Listed as UNESCO World Heritage, the mines have been kept beautifully. Some of the residual excavations have been altered and turned into chapels, store rooms, workshops, etc. There’s tourist routes that have been in existence since the early 19th century. There is so much history to these royal salt mines that it would be a loss to miss it.

Then of course there are other things to be found in Poland such as the Auschwitz concentration camp, 19th century mansions in Łódź, the birthplace of Copernicus in Torun, the Old Town Hall in Wroclaw, Warsaw and of course, Krakow.

I have always had this fascination with old Egypt – Pharoahs and their Queens, the Pyramids, the tombs and the whole Egypt history so this is definitely on my “countries to visit before I die” list.

Now who would’ve thought that there are so many beaches in Egypt with activities such as snorkeling, kite surfing, paragliding and such? However, even though I am a “beach person”, I don’t think I would care much for the beaches in comparison to the ancient Egypt sites when I go there.

Catacombs of Kom Al-Shoqafa in Alexandria, Royal Tombs of Tanis in Ash-Sharqiyah, the Tombs of Bani Hassan in Minya which if I’m lucky, I might be able to check Tall Al-Amarna and the remains of Akhetaten as well as Akhenaten (which happens to be one of my favourite Pharoahs). There are caves and valleys that would blow my mind, if I ever get the chance to visit them.

It’s all about the waters when I talk about Palau. Azure-blue waters because Palau is an archipelago of more than 500 islands and you can’t get more sun, sand and sea than that.

However, Palau is an expensive country so I might have to sell my legs, kidneys and boobs before I am able to swim with those jellyfish.

One word – Hot Air Balloon. I am in love with them and Cappadocia is the only place I would never say no to a hot air balloon ride. I can just imagine that sunrise in the horizon, the wind in my hair, the colorful balloons near me and the beautiful ground under me as I float high up in the sky. Oh wow, I can burst in excitement from just the thought of it.

Of course however, there are other places in Turkey that I would not pass up to go to like walking on the sandy beaches of Antalya, seeing the Greek relics of Ephesus, swimming in the Butterfly Valley of Faralya, shopping at the 600 year-old Koza Han market in Bursa and so much more. The colorful magic that is Turkey will never stop enchanting me.

Even though I place Italy at the bottom of my list, Italy has always been one of those countries I dreamed of going to since I was very young. But if I ever go to Italy, I would probably need 2 weeks (at least) to cover some of the places I have been longing to go, namely in Rome, Venice, Florence, Milan, Naples, Pisa and so many more.

Just like Egypt, I have always had this fascination of the Renaissance era, and not just the arts but the history of the Vatican, especially of one of the most notorious pope in history – Pope Alexander VI and his Borgia family.

So, apart from riding the gondola in Venice, sipping coffee in a cafe in Milan, visiting museums and monuments in Naples and Florence or taking ‘touristy’ photos in front of the Leaning Tower of Pisa, it is the Vatican that pulls me like a magnet to Italy and it is the Vatican that I would love to explore and venture.

All those histories and all the beauty contained in one country, there is no doubt I need more than a fortnight just to cover and experience them all. Oh, certamente!

** All photos taken from Google. If I have used your photos accidentally and would like me to remove them, please contact me. Thank you.