When I was in Phuket, Thailand for my honeymoon last February, we stayed at one of the most beautiful resorts on that island. Although my husband and I would rather not leave our gorgeous room, I wanted to show my husband some of Phuket’s beautiful islands, especially since he has never been to Phuket before.

And what’s the best way to do so other than a full day island hopping in Phuket, Thailand? 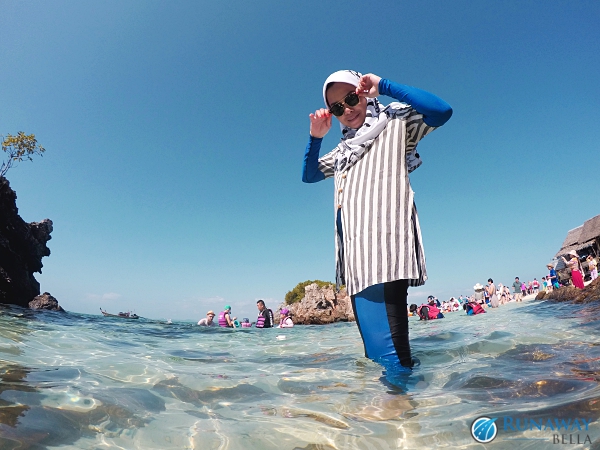 Our tour operator for the full day island hopping in Phuket was Vitamin Sea Tour Phuket. The tour operator was suggested by the resort we stayed at.

Phuket is a popular tourist destination and there are hundreds of reliable tour operators on the island. Just make sure you do some research i.e. tour operator, type of boats, islands included in the package, etc (Google comes in handy) before you purchase your island hopping package. 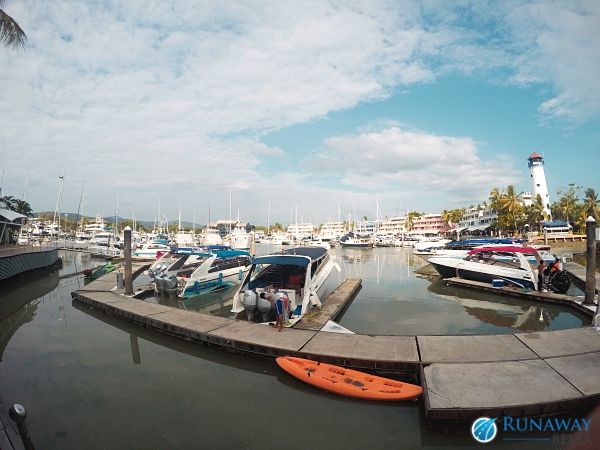 We woke up early for our full day island hopping in Phuket tour since we were told that the van transfer would arrive at our resort around 7.30am. The van then started picking up other island hoppers from other hotels before heading to Boat Lagoon Marina.

It took about 40 minutes drive to arrive at Boat Lagoon Marina after the van picked up the last couple from Patong Beach.

After arriving at Boat Lagoon Marina, we met with some of Vitamin Sea Tour’s staffs who then segregated us to the two different groups – those going for Phi Phi Islands Tour and James Bond Island Tour.

We had to wait for a while for other island hoppers to arrive before starting the tour. Luckily there was a lounge area to have some coffee or tea. Vitamin Sea Tour even provided nausea medication (in abundance!) so if you’re the type of person who are easily affected by the sea, you should take a pill at least 30minutes before setting off.

Note: Do not take more than one nausea medication or you’ll end up feeling sleepy during your tour. 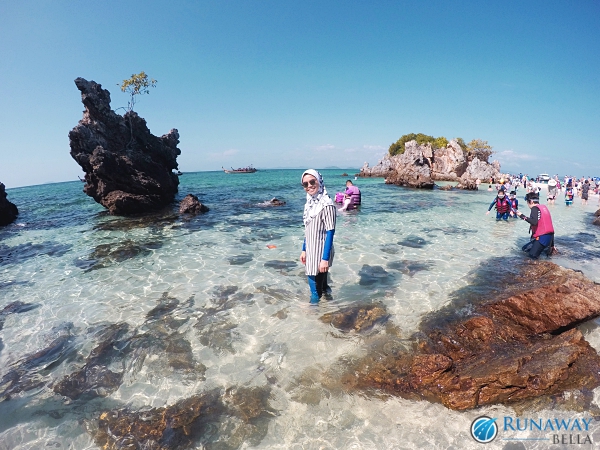 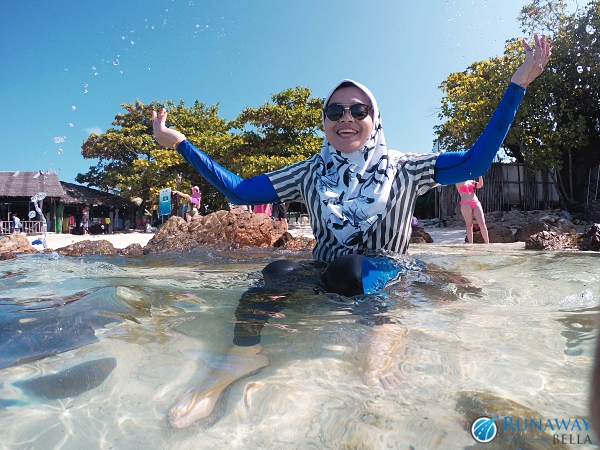 The first island we headed to was Khal Island. It took about 30 minutes speedboat ride from the Boat Lagoon Marina. We were given 40 minutes to snorkel or swim in Khal Island before heading to our next destination.

I wasn’t very happy at Khal Island though since there were so many people; mostly the PRC. They were so loud and left so many rubbish behind as they leave.

At first, I found a quiet place for my husband and I near the rocks. We were just dipping in the water and my husband started snorkelling in less that 10 minutes when a large boat of PRCs arrived and throngs of them came and scattered around the area where I hid my bags that for a moment, I thought they were stolen.

Luckily, I managed to fish my bags from under one of the tourists’ towels. 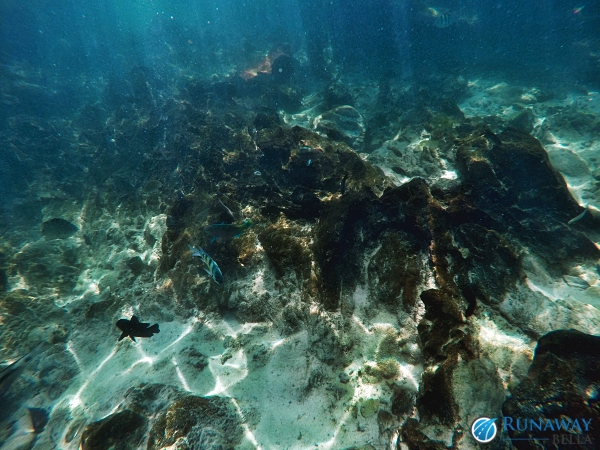 Khal Island was very pretty though, the water very clear and there were many colourful fishes of different types to be found. It would’ve been very calming if there weren’t so many people.

Another thing that left me baffled was when a PRC couple and their young daughter catched a fish in her little pail and put it in a bottle. My husband was in the water when this happened and I went to the girl’s mother to tell her that she mustn’t do that to the fish but she just stared at me blankly, probably not understanding what I’m saying (I spoke in English).

I think something must be done by the government on Chinese (PRC) tourists to prevent such things (or worse) from happening! 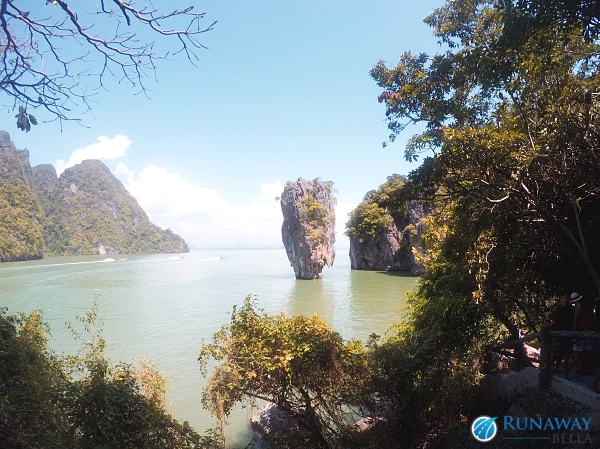 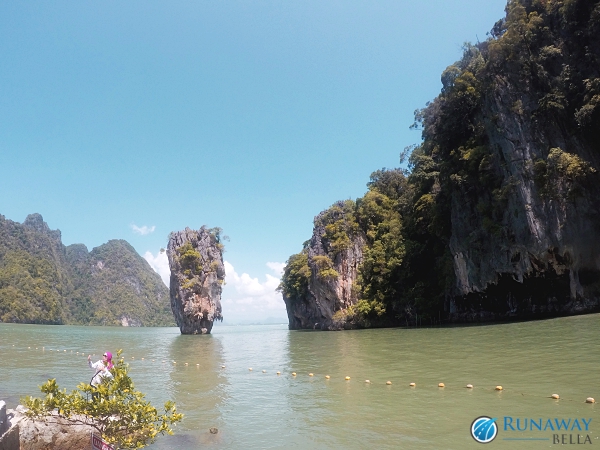 In one of James Bond’s movie “James Bond: The Man With The Golden Gun”, you can find this island featured in parts of that movie. Since then, this island has been swarming with tourists, and the locals took up the opportunity to sell some local products at the stalls nearby. 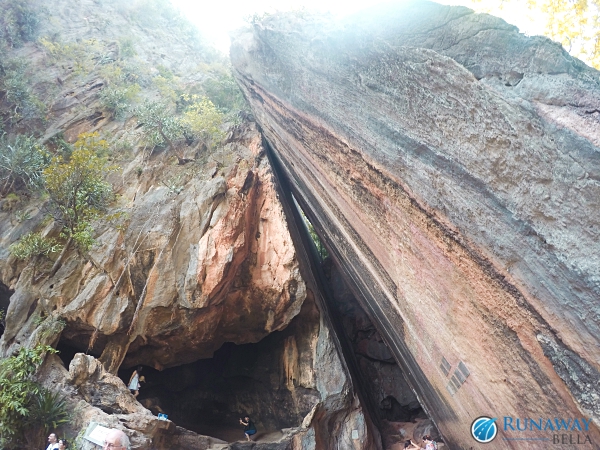 The tour on James Bond Island itself was only for a short while where visitors are welcomed to take photos of the limestone island, shop at the stalls (we were advised by our guide not to purchase from them because they are very expensive and of low quality) or just walk about and take photos of the nearby cave. 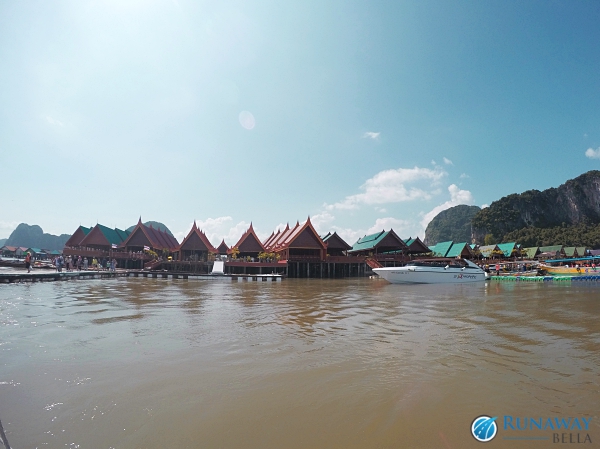 Honestly this was the first time I ever heard of Panyee Island (local: Ko Panyi).

Since our next activity would be canoeing, we had to fuel our bellies first. The weather was quite humid that day and we were all looking forward to a good meal and cold drinks. It took about 30 minutes on speedboat from James Bond Island to Panyee Island.

Our guide told us that they will be bringing us to Panyee Island, a Muslim settlement, and we will be served Halal food for lunch. That was good news to most of us, considering there were four Muslim couples on board (including my husband and I). Panyee Island is a fishing village descended from two seafaring Muslim families from Java, Indonesia. 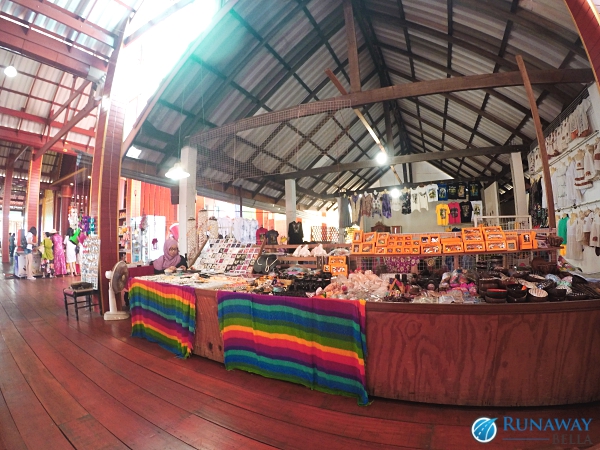 I was quite surprised to see the size of the settlement when we first arrived at the island. There are more than 1,500 people living on the island and they have their own Muslim schools and mosque. The restaurant where we had our lunch were also huge; able to house many groups of tourists from many different tour operators.

Our lunch was a very common Thai lunch with rice, seafood tom yum, vegetables, fruits like watermelon and pineapple and a choice of hot or cold drinks.

Since we were catching up with time, our lunch break was only for one hour before we head to our next destination of island hopping in Phuket: Hong Island. 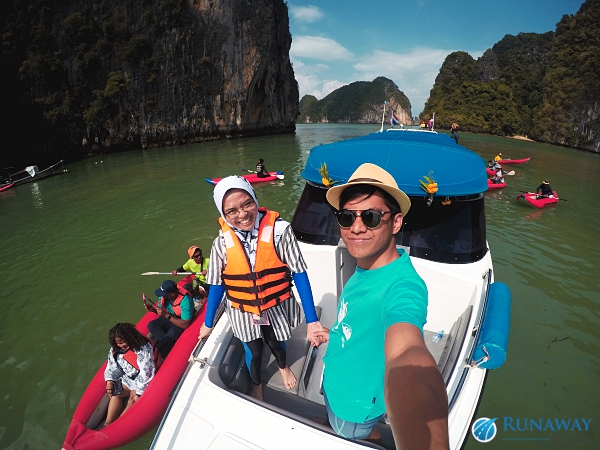 Our fourth island hopping in Phuket destination was Hong Island where we were taken on a canoe ride by local canoe paddlers along the beautiful rocky outcrops of Hong Island. 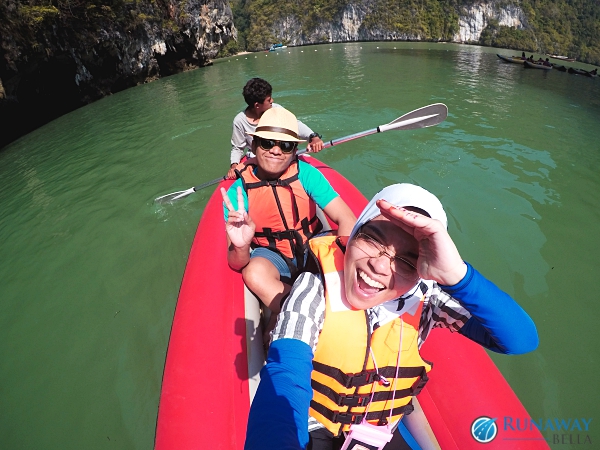 I have to say, Hong Island is probably one of my favourites among the islands that we hopped to so far. It took only about 10-15 minutes on speed boat from Panyee Island and the view was gorgeous.

Imagine the sound of flapping water, birds flying the air, gibbons and a large lagoon for you to canoe in and out of.

The lagoon is best accessed at low tide by canoe, with a cliff passage on the way out that you should not miss taking photos of. 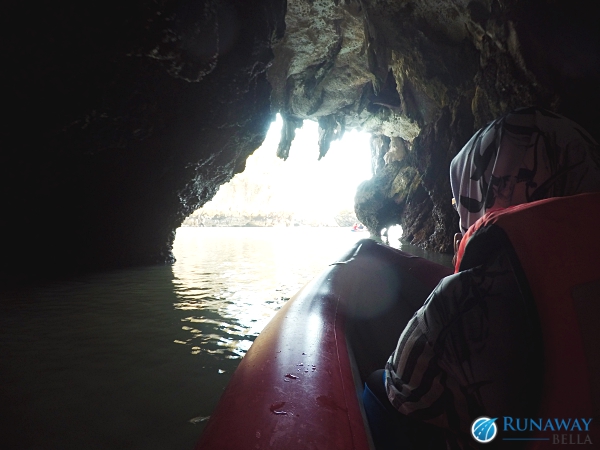 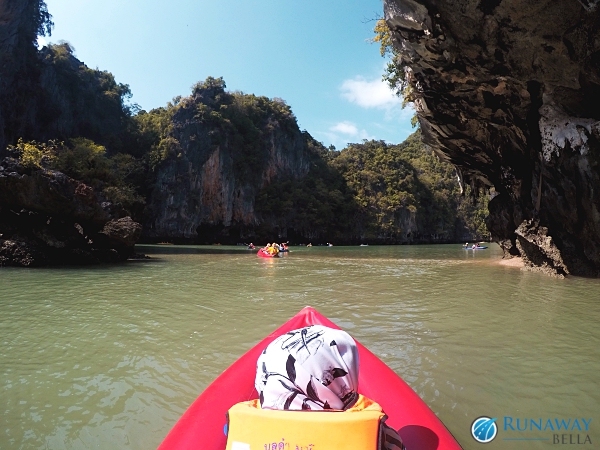 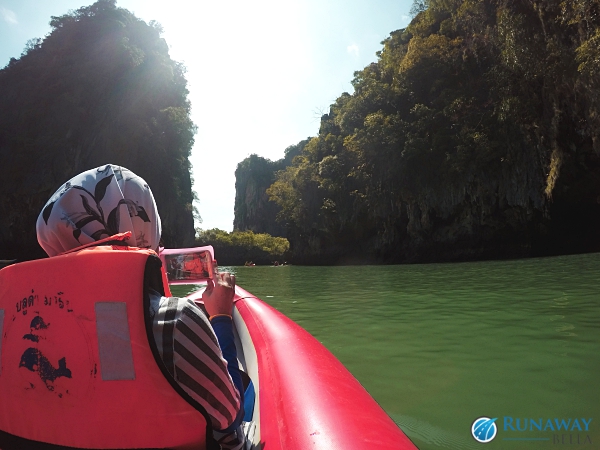 The canoe ride that we took had it’s own paddler so it can only take another two person per canoe. Our paddler was a young boy of 13 years old and he told us that he’s doing this regularly after school to get some extra pocket money. The older paddlers would tease him but he was all smiles and spoke shyly to us in broken Bahasa Malaysia (since we told him we’re from Malaysia).

I wish the canoe ride would be longer though, although it did take about 30-40 minutes for us to go through the lagoon and then back out along the wall of Hong Island before we headed to the speedboat. Oh, and remember to tip your canoe paddler. 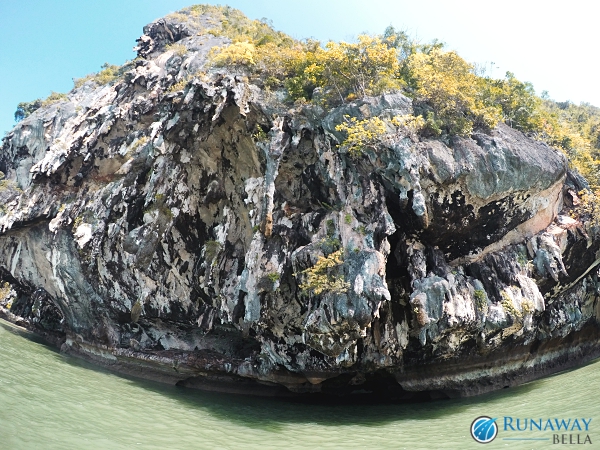 There was supposed to be another canoeing into Panak Island but sadly, by the time we arrived, the tide was already high that we could not see the entrance to the Panak Island cave anymore. Most of us were tired by then anyway, what with the heat and the bumpy ride on the speed boat so we didn’t mind not being able to go into Panak Island’s lagoon.

Panak Island is a pretty island, which also has it’s own cave and mangrove forests in the lagoon. There are many wildlife on the island too including walking fish, fiddler crabs and hornbills.

It’s a sad thing that we couldn’t see the “inner” beauty of Panak Island but the outside walls of the “Mud Cave” was a good enough view for us.

Our island hopping in Phuket tour ends around 4.15pm and by the time we arrived at the Boat Lagoon Marina, it was almost 5pm.

Vitamin Sea Tour prohibits pregnant women from joining the tour and does not recommend those with heart and spine conditions to join as well. I understand why, the speedboat ride was super jumpy most of the time and by the end of the tour I thought my bum would be bruised to blue already.

After we arrived at Boat Lagoon Marina, we went on the same van transfer that took us in the morning (with the same group of people in the morning too) so that we would be dropped off at our respective hotels.

The unique part about this island hopping in Phuket tour package was that all those who joined the tour were newlyweds.

If you’re looking for an island hopping in Phuket package, do check out Vitamin Sea Tour Phuket for interesting packages.

The James Bond Island Tour we took costs THB3,500 per adult (or THB2,000 per child) and they operate daily. I loved the guide who was with us that day – she was very feisty and fun. I wished the tide was friendlier with us so that we could explore more caves but all in all, it was a good island hopping package and we had lots of fun in the sun.