Holiday in Jeju Island, South Korea would be incomplete if you did not visit some of these top places there. If time is of the essence to you (as it was for me), let me share with you five places you can visit in Jeju in only one day!

Have you wondered what you could do in the relaxed and scenic Jeju Island?

Allow me to share with you FIVE places I covered in one day in Jeju Island, South Korea when I was there a few weeks ago.

I think I have shared before that public transport is a hassle in Jeju Island so it is advisable to rent a car and make your way to your places of interest. Since my last day in Jeju Island was more for relaxing and enjoying Jeju Island, I left my hotel, Jeju Landing International to my first destination at 9am and finished the last destination at around 6pm. 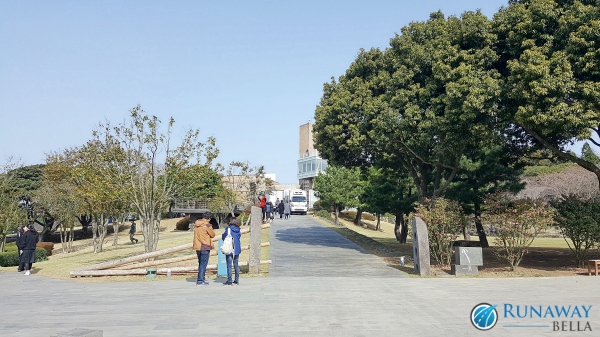 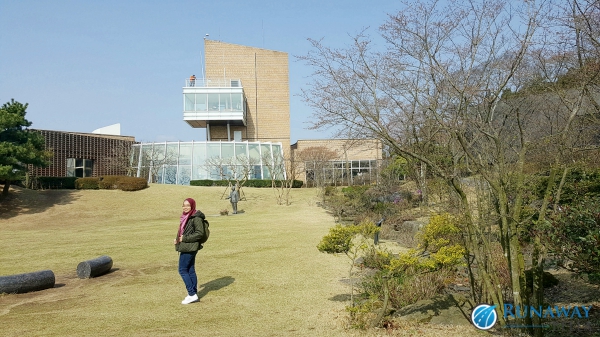 However, you can find more than just tea products at the Osulloc Tea Museum.

As you step into the museum, you will see a section dedicated in sharing Jeju Island’s tea history. You should take some time to read how tea leaves are grown and harvested in Jeju Island, and how they are used in daily ingredients. 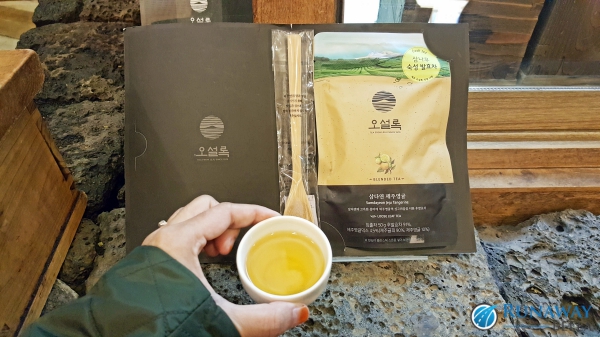 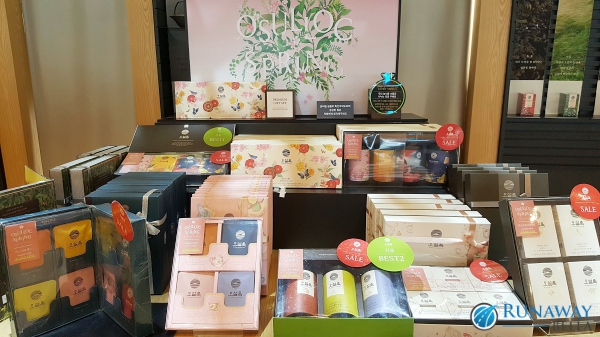 Later, you will see the “shopping area” where you would find many tea-based products for you to choose from. You could try the green tea, prepared hot just for you. You could purchase the green-tea facial and beauty products. You could also purchase the souvenirs and trinkets of Osulloc Tea Museum.

Note: Make sure you keep the receipts because purchases above 35,000KRW is eligible for tax rebate (at the airport).

Next to the shop is a cafe for you to sip on your hot tea while enjoying croissant with Green Tea Milk Spread – or other choices according to your preferences. If the weather is cold out, this would be a great choice. 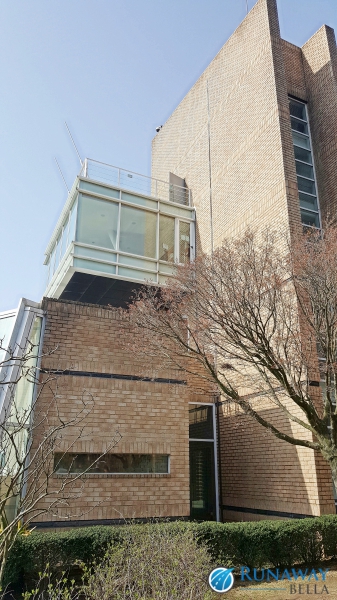 On the second floor, you can enjoy the view of the tea plantation opposite the museum.

Jeju Island Osulloc Tea Museum could get quite crowded, especially in the weekends. So make sure to plan your visit here. 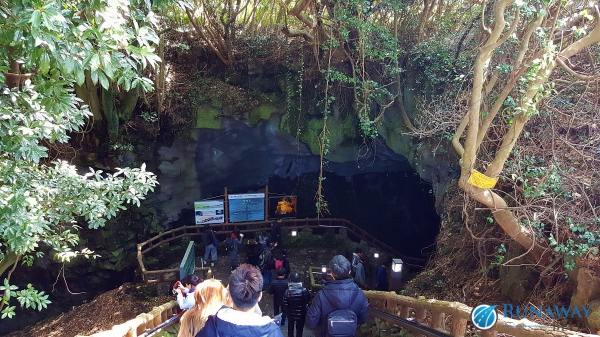 Did you know that Jeju Island’s Manjanggul Cave is one of UNESCO World Heritage?

I have always enjoyed caving, so when I read about Manjanggul Cave, I didn’t want to miss the opportunity to experience this UNESCO World Heritage cave in Jeju Island.

Manjanggul Cave is designated as a natural monument in Jeju Island, it being one of the finest lava tunnel in the world. It was formed when lava from the deepest part of the ground sprouts from the peak and flows to the surface.

Manjanggul Lava Tube was formed by Geomunoreum volcanic eruption. There are also others caves along the Geomunoreum line for you to explore. 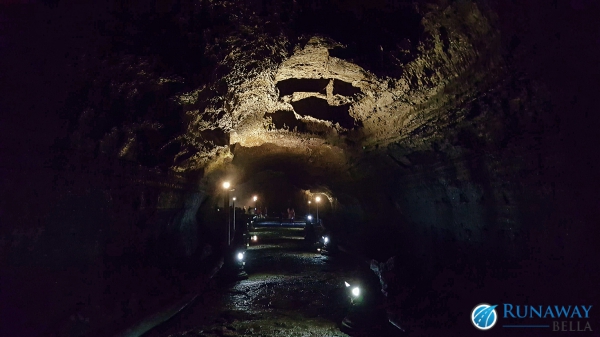 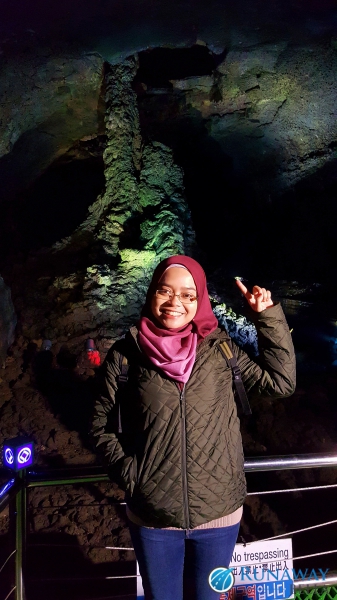 As I walked through the 7.4km cave, there are many lava eruption structures to see like the lava flow line, lava shelves, ropy structures, lava stalactites and lava pillars that are very well preserved. Oh, there was a Turtle Rock too!

Walking into and out of the cave would take about 45minutes at a slow pace. It is easy because the cave floor are mostly flat. However, since I was there at the end of March, the floor is mostly wet so take caution.

The cave itself is not the only attraction, in my opinion. After your walk in the dark, I would recommend you to explore the beautiful gardens surrounding Manjanggul Cave. There are many instagrammable places here! 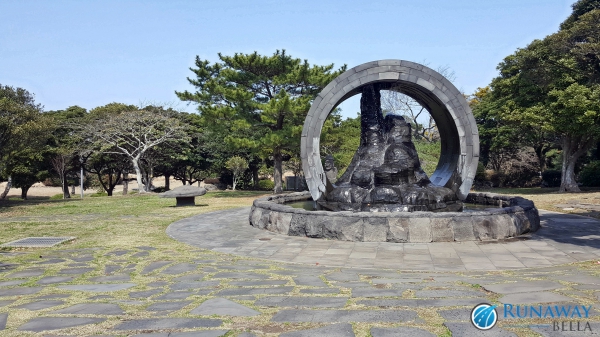 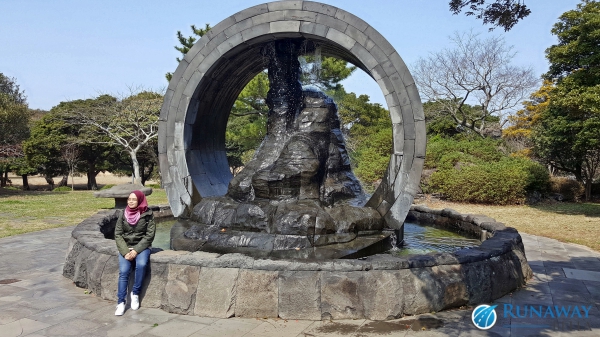 Along the way to Seongsan Ilchulbong, you would find many flower fields, especially the yellow Canola flowers (in Spring season). 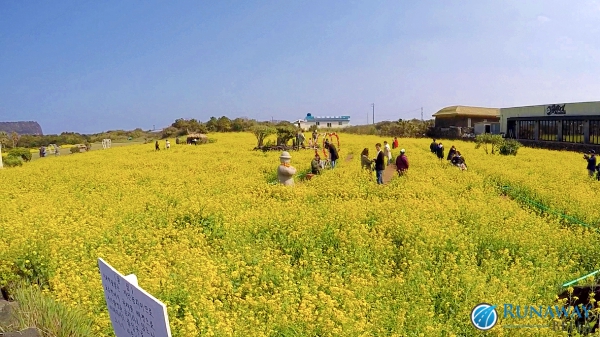 If you’re not so much in a hurry, just take a stop by the road and take some photos among the flowers. However, most of the operators will not allow you to take photos of the field without paying so, make sure to get that Korean Won ready. 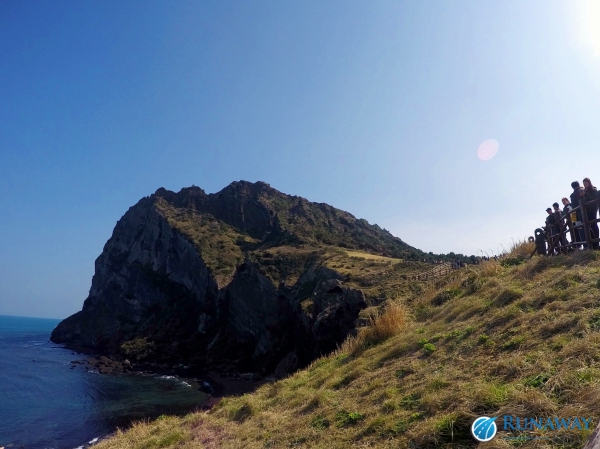 Next, you cannot miss climbing Jeju Island’s Seongsan Ilchulbong, which is another UNESCO World Heritage and witness the crater at the top of the peak yourself.

Yes, the climb might knock the breath out of you, especially if you only had about 40minutes to climb up and get back down (which was what happened to me, LOL!). However, this I can assure you – the view at the peak would be worth all the sweat and heart pumping.

I find climbing stairs (and there were many) are harder than climbing a terrain at an angle. My knees were like jelly when I reached the peak and it wasn’t improving much when I was going down either. 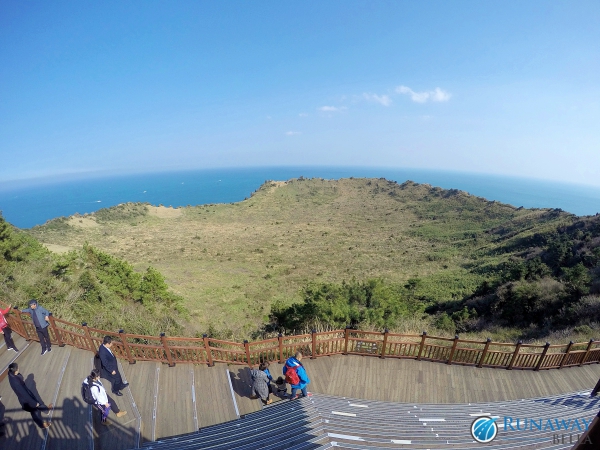 Many locals love climbing Seongsan Ilchulbong as a form of exercise. In the spring, the wind could be a little strong as you climb up, yet it cools off your hot sweaty body. The fresh air is also something I welcome very much in comparison to the congested air back home.

You can end the day taking a stroll at the beautiful Seopjikoji – a good choice for couples and family.

“Seopji” is an old name for the area and “koji” means sudden bump on land in old Jeju language. Located at the eastern shore of Jeju Island, the view is fantastic especially during spring when the Canola flowers are in bloom. 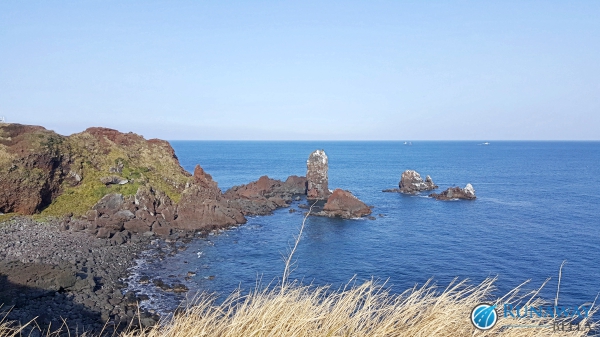 If you’re a fan of Korean Dramas, you would notice some familiar spots from dramas like “Gingko Bed”, “The Uprising“, and “One Thousand and One Nights”. 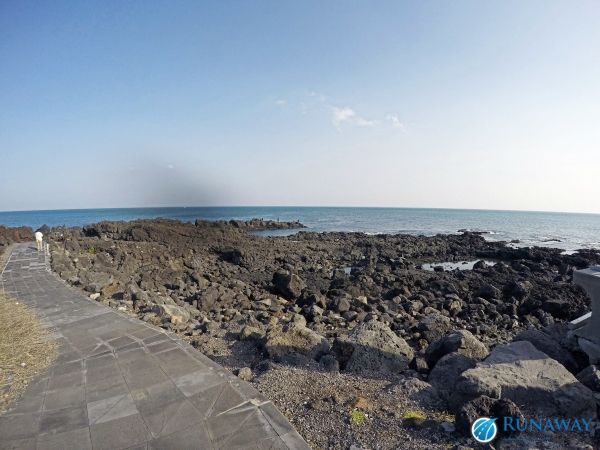 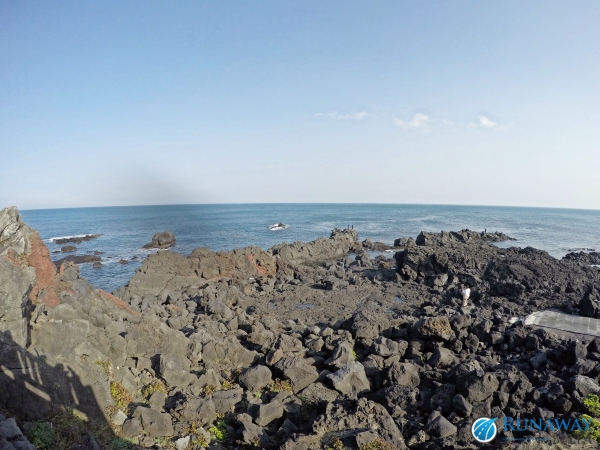 On top of the hill is the Hyeopja Beacon Fire Station. It took me about 45 minutes to make it back and forth. It could be quite pack though, especially in the evening because of the sunset so, make sure you plan your time to come here.

There are many restaurants near the entrance – selling local delights. However, it might not be the best choice for Muslims.

I have to give points for the view and the cool wind though – they make me feel quite romantic.

I share five of my destinations on my own Jeju Day Tour below:

18 thoughts on “Jeju Island, South Korea : Five Places To Visit In One Day”