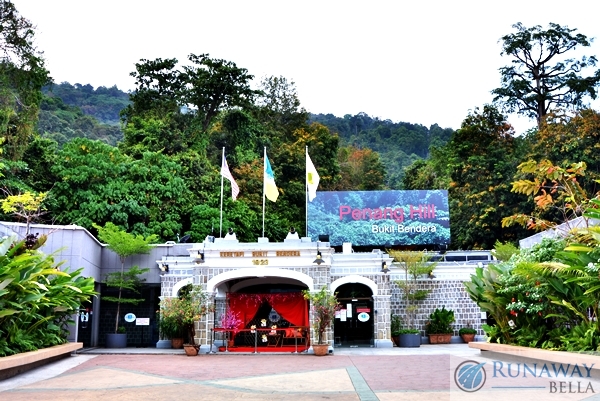 Penang Hill, or Bukit Bendera in Bahasa Malaysia, consists of 5 hills – Halliburton’s Hill, Strawberry Hill, Government Hill, Fern Hill and Mount Hagier. At the height of 830 metres above sea level, Penang Hill was first known as Signal Hill before it is called Flagstaff Hill and later known as Penang Hill. The Bahasa Malaysia version however, is still called Bukit Bendera which is translated as “Flagstaff Hill”. This is most probably because the name is more easily remembered by the locals.

Francis Light plotted a horse track to the peak of Penang Hill in 1788 and founded Penang Hill, a year after the British arrived in Penang. Francis Light later gave part of the place to his friend, David Brown where Brown planted strawberries at what we now know as Strawberry Hill.

The Governor’s bungalow was the first bungalow built on Penang Hill back in 1790’s and was later renovated in 1870. Other bungalows were only built after the funicular railway was opened in 1920’s. Only British people are allowed to live at the peak of Penang Hill.

Before Malaysia’s Independence, nobody is allowed to own a bungalow on Penang Hill except the British. If you take the funicular train there is an interchange station halfway to the hill top where you will pass the first tunnel. Bungalows from this level to the bottom of the hill can be owned by non-British people whilst bungalows from that level to the top of the hill are only for British citizens.

Today, there are no new bungalows allowed to be built on Penang Hill. Buyers are only allowed to buy old bungalows.

History of the Cannon on Penang Hill

On top of Penang Hill, there is a cannon, located somewhere nearby the Governor’s bungalow.

Back in 1770’s, the East Indian Company which was based in Madras made over 70 cannons throughout a course of time and out of the 70 cannons, 5 were deemed the best. These 5 cannons were separated and brought to different locations, which are Madras, England, Singapore, Fort Cornwallis and Penang Hill. The cannon on Penang Hill was dated 1796.

The cannon on Penang Hill was used for signaling incoming ships – hence the name Signal Hill. From the viewpoint and location of the cannon on top of Penang Hill, ships coming towards Penang shores can be seen clearly. The cannon will send a blast to signal if the incoming ships are friendly or enemy. If the ship is friendly, a blast will be made and a government flag will be raised. If it is an enemy ship, a blast will be made and enemy flag will be raised before further actions are taken. This is also the reason why Penang Hill was also named as Flagstaff Hill.

Currently, the only way to go up to the top of Penang Hill is by funicular train. However, before the funicular railway was built, the only way up the hill was by foot, horseback or dooly (sedan chair). The dooly is carried by servants on their shoulders – four people needed to carry the dooly. The road from the bottom of the hill to the top is about 6 kilometres which takes about 2 hours by foot. The wealthy often preferred travelling up the Penang Hill by dooly.

The first and second generation funicular train was a failure and the trains were abandoned. The third generation train was first used in 1924 where the train takes 30 minutes to get from the bottom to the top of the hill and is separated into 2 sections. The funicular train used now is the fourth generation train which only takes up to 4 minutes to run from the bottom to the top and can accommodate 100 people at one time.

The David Brown Restaurant is located at Strawberry Hill where Francis Light’s friend David Brown first planted his strawberries many many centuries ago. The restaurant serves English style food. It has a relaxing ambience, suitable for sipping tea a-la Queen of England with your close friends.

One of the nice things about this restaurant is that it overlooks Penang Bridge in the distance. It has the nicest setting for a marriage proposal. If you plan to propose, why not bring your lady to this restaurant in the evening when the sun is about to set and have an early dinner with her whilst enjoying the orange and red-streaked sky. Once the sun has set behind the horizon, both of you can enjoy the view of lights twinkling in the distance that is Penang. Then, you may get down on your knees, open that Cartier ring box and ask her to marry you. After she says yes, you can sweep her off her feet and dance to the slow music playing in the restaurant by the fish pond. Let the moon and the stars witness the story of your love as you dance close in each other’s embrace.

Penang Hill is one of the must-go places if you ever visit Penang. Either to explore the history of Penang Hill by yourself, to try the funicular train or to enjoy the ambience of the hilltop, you will not be disappointed of this place.

Thank you Gaya Travel and Tourism Penang for this FAM Trip.