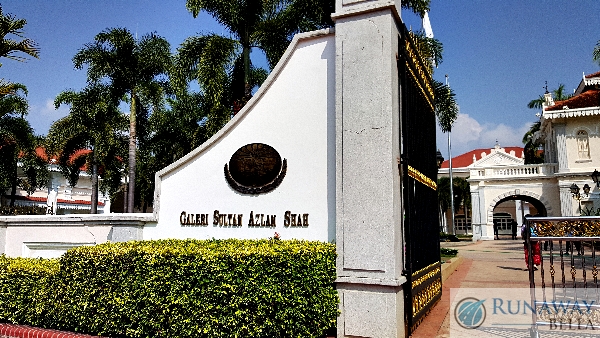 Upon arrival at the Royal Sultan Azlan Shah Gallery in Kuala Kangsar, Perak, the atmosphere changed. This place is beautiful, even from the outside, you can see that it is well kept and taken care of.

I was lucky enough to visit the Royal Sultan Azlan Shah Gallery (or known as Galeri Sultan Azlan Shah) to learn more about the Perak royalty’s histories, the collections available for display as well as the cars (and this is definitely my favourite part) used by the royal family.

The Royal Sultan Azlan Shah Gallery was previously called “Istana Hulu”or “Istana Kota”. It is the first concrete palace built in Perak in 1889 and completed in 1903. “Istana Kota” was owned by Almarhum Sultan Idris Murshidul Azam Shah, the 28th Sultan of Perak from 1887-1916. Later, his son, Sultan Abdul Jalil stayed and in 1918, his grandson, Sultan Yussuff lived here.

By 1954, the Ministry of Education owned “Istana Kota” and turned it into Sekolah Kebangsaan Istana Kota in 1957. In 1970, it became Sekolah Raja Perempuan Muzwin, named after DYMM Raja Perempuan Perak (Princess) Raja Muzwin binti Raja Aliff. Finally, in 1999, the building was proposed to be turned into a gallery. The building was renovated, underwent an upkeep and opened as Royal Sultan Azlan Shah Gallery in 2003. 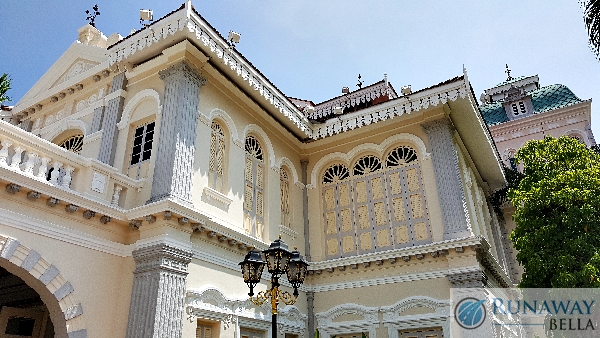 Standing within the gallery’s compound, you will experience a kind of uplifting feeling when you see the colorful flowers surrounding the compound and walk along pathways to patios on the side of the building. There is a large fountain in front of the gallery’s entrance, although it was not in operation when I was there.

The architecture of the building is unique. The roof is shaped as “bumbung limas”, made from “nyeri” – which is an interesting, pyramid-like roof structure.

According to the guide, for the initial construction, the building’s materials was sourced from overseas. The roof tiles came from France, walls and flooring tiles are Italian while the woods used for frames and pillars are local “Cengal” and “Meranti” wood.

In those days, trade vessels that passed through the Perak River was used to ship those materials for construction while elephants were used to transport the local materials (wood).

Today though, with additional bricks stored, the building still has it’s natural Malay Sultanate look, but with a touch of modernness.

Being in the gallery is an experience of it’s own, in my opinion. You’ll get to see beautiful artifacts, costumes, daggers, learn about the history of the royal family, see personal collections from the Royal family and so much more.

There is a section of clothes and robes, mainly used during University graduation ceremony where Sultan Azlan Shah acts as the patron of the University. There are many photos and descriptions under them, head wear, hairpin, collection of personal watches of various brands and types as well as a very fancy baby cradle. Not forgetting to mention, a 1.37 meter fungus that was a state gift to the Royal family. What is the fungus for? Not for eating, that’s for sure!

Then, there are the cars. The Royal family has a large collection of cars but the ones for display are the old models of Rolls Royce and other luxury vehicles. There’s also a section in the car museum n transportation used in the olden days, including a transport used to carry “Jenazah” (deceased body) to the grave.

This trip was made possible by Gaya Travel Magazine and Tourism Perak in conjunction with World Of Wonders (WOW Perak), Visit Perak Malaysia 2017.

21 thoughts on “Stepping Into The Royal Sultan Azlan Shah Gallery”