It was more than 5 years ago when I first went on a holiday in Patong, Phuket. I thought the locals were very nice and even though the “nightlife” could get a little rowdy, it was also fun to join in. Foreigners (whom the locals called “Pharangs“) were everywhere – since Phuket is a popular tourist destination, but the numbers were manageable back then. The throngs of tourists were blessings to the locals though since it’s “good for business”.

However, when I was in Phuket with my husband last February – which was the 5th time for me, I felt slightly suffocated. There were so many tourists at Patong (and not just the Pharangs) that the roads were at a standstill for long periods of time. A 15-minutes tuk-tuk ride from my resort in Kamala to Patong became an almost 90-minutes ride. I saw many new resorts along the road that was still under construction, I saw many newly built hostels at Patong Beach and there were many private apartments erected for foreigners too.

It wasn’t the Phuket (or shall I say, Patong) that I knew or remembered. Some things were still the same but many things are new and different.

Still, I wanted my husband to enjoy his first time being in Phuket so apart from the beach activities, what other way to experience Patong, Phuket if not by indulging ourselves in authentic and Halal Thai food, get some good and cheap Thai Massage and dive right into its “famous street” at night?

In Thailand, a majority of the population is Buddhists but in Phuket, about 20% of the locals are Muslims and most are from the Malay descent. So Halal food is quite common. The many Muslim tourists also contribute to the number of Muslim-friendly food outlets in Phuket this past couple of years.

I see many Arabian foods with Halal signage along Patong but my tongue prefers “wet food” so I’d rather find some good Thai food.

Since we spent the day at Patong Beach, it was closer to walk from Patong Beach, along Patong Beach Street (formerly known as Bangla Road) to get to Jungceylon Mall. I believe the mall has expanded and there’s a whole stretch of restaurants available at the end of the centre court. However, the restaurants here do not have Halal certificates – unless you don’t mind and would just go for seafood.

To my surprise though, we found that there were two Halal food stalls at the Food Bazaar (like a food court) at the Basement level of Jungceylon’s “That’s Siam” section. Since we frequent Jungceylon and nearby Jungceylon during the day, we went to have our lunches at Jungceylon’s Food Bazaar for two days straight. 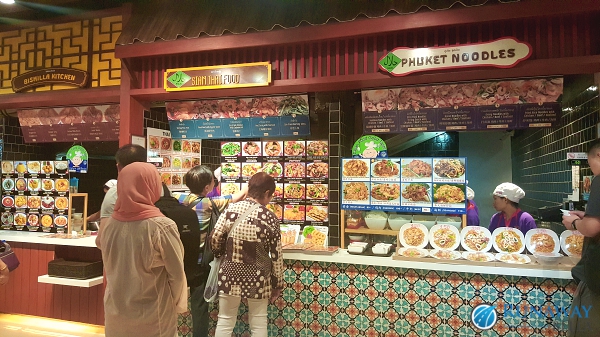 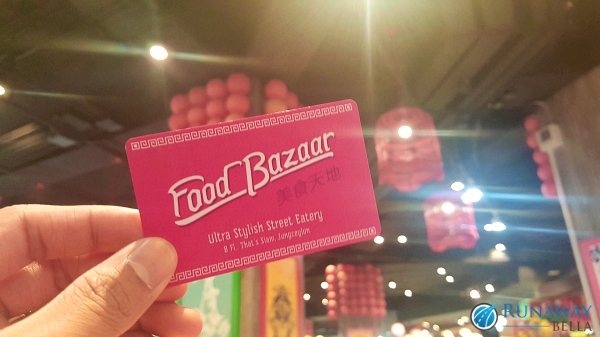 I thought having to “top up” a Food Bazaar debit card at the cashier before purchasing my food at the stalls (and returning to the cashier to get a refund from the balance in the debit card) was a bit of a hassle. I thought it was a little “back-dated” practice, especially when I was there during peak hour – having to queue to top up the debit card, queue to order my food and then queue again to get my refund. Why can’t we just pay at the stalls? Or, get a receipt from the stall (upon ordering) and pay at the main cashier?

However, the food wasn’t bad and the portion was more than enough. Drinks were okay too. 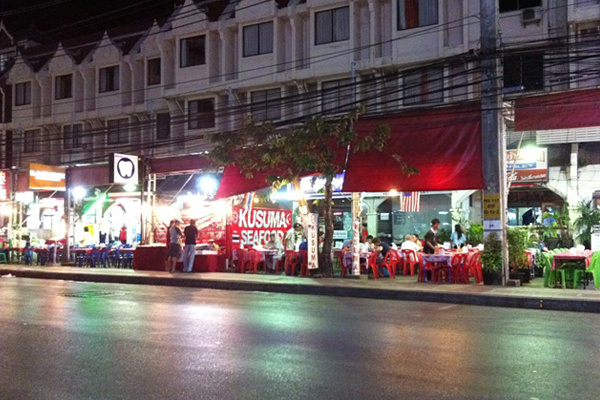 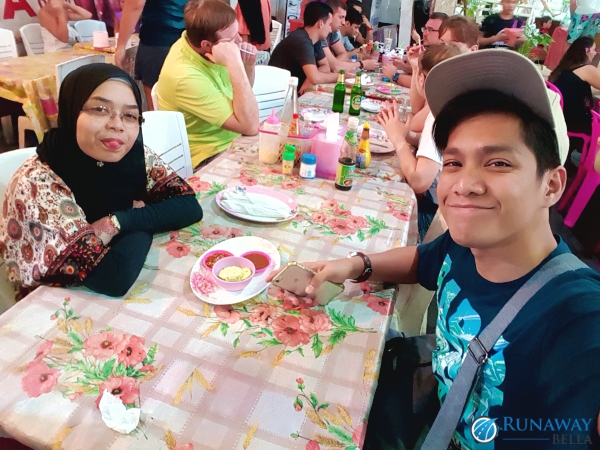 If you’re staying at Novotel Phuket Resort, then the restaurant (there’s a row of restaurants here) is right opposite your resort and dinner would be easy to find.

Walking to Kusuma Seafood Restaurant could take about 10 minutes from Patong Beach, especially with the construction on the roads leading to the restaurant and the heavy traffic. Waiting for food could take some time too, especially since we came at peak hour and tables along the stretch of rows of restaurants were full.

Of course, there are many other foods available in Patong, Phuket that would fit your taste buds.

When I was in Patong, Phuket for my honeymoon, we liked the titbits like Nutella Pancake, the fresh fruits sold at stalls near the roadside, ice cream, and many more. 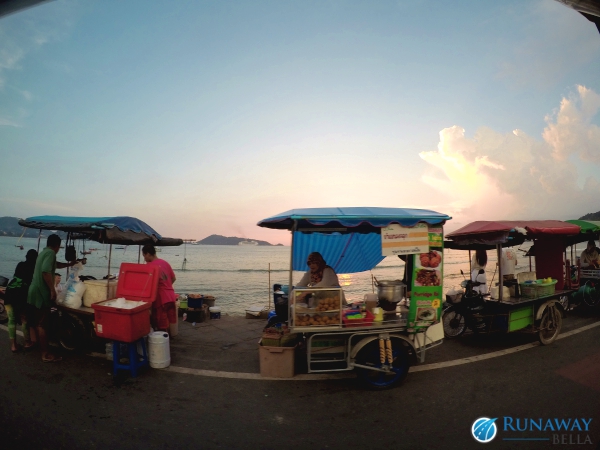 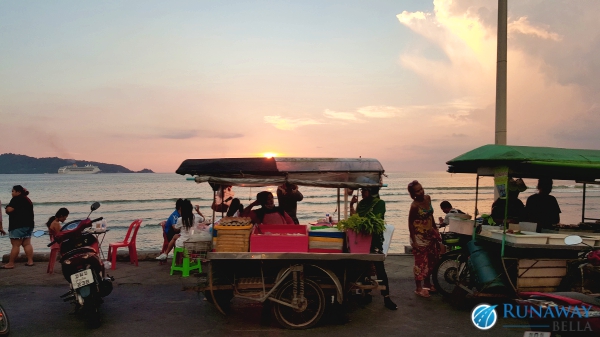 I especially loved Thailand’s Svensen’s because of the local ice cream flavours. However, the Durian Ice Cream with Sticky Rice was already not available. The Strawberry Bingsu was still very delicious though. A richly flavoured ice cream (or bingsu) after long walks on a sunny day is definitely a treat to self. 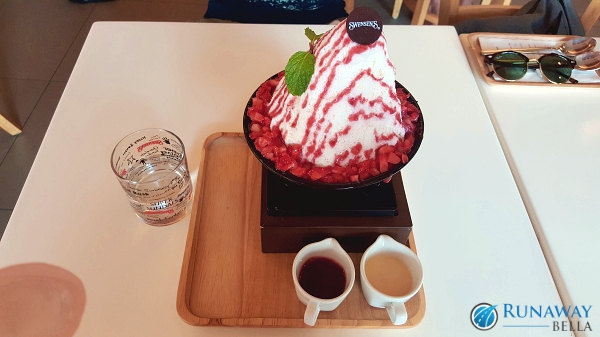 I don’t know about you but for me, a cheap Thai massage in Phuket should be around THB300 per hour. The ones in Jungceylon are slightly more expensive than that – which ranges from THB450 to above. It’s understandable, considering that the Mall is more convenient, with food stalls nearby and close to shopping area.

But, after a day of walking, physical activities and sweating under the sun, a little walk to the cheaper side of Patong wouldn’t hurt, would it?

After many times coming to Patong, Phuket, and trying out some of the massage parlours here, I find myself always coming back to one particular massage parlour called “Emotion Day Spa”. Why? Here are my reasons:

The whole time my husband and I was in Patong, Phuket, we came to this spa for our massages and went back to our hotel feeling good and satisfied!

If you’re into the nightlife, Patong Beach Street (or formerly known as Bangla Road) is the place for you. 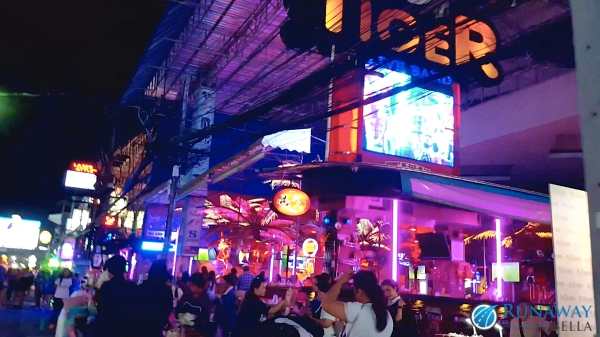 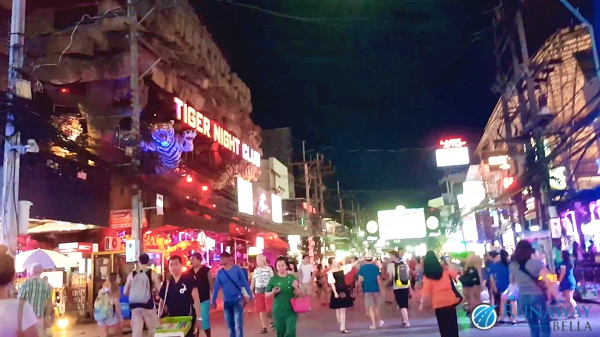 I noticed the Tiger Night Club still standing tall and strong as it were when I first came here 6 years ago. You can find men trying to sell “Thai Girl Show”, “Ping Pong Show” or “Sushi Show” along the road and in front of the clubs and bars. These shows are more “intimate” and not something you can walk-in into, hence why the men tried selling them to you as you’re strolling down the street. If you show interest in such shows, they might hike up the price for you so, be wary.

As for me, I just like people watching along this street. You can find many interesting behaviours on display – either from the sober or the drunks.

Oh, and there was this new cool Virtual Reality place along this street too. I wish I tried it but there were many waiting in line and I just wanted a stress-free night, so I passed.

Luckily, Patong Street wasn’t as rowdy as years ago, even though my husband and I were there during peak season. Yeah, there were many tourists and partygoers but the street seemed more organised now.

Note: Don’t take photos with street performers, lady-boys or locals UNLESS you don’t mind paying them a hefty “tip”.

17 thoughts on “Thailand: A Relaxing Day On The Streets Of Patong, Phuket”