They’re not exactly next to each other, but these two well-known temples in Indonesia: Borobudur Temple and Prambanan Temple is deinifetly a must-visit when you’re in Central Java or Yogyakarta.

Both these temples couldn’t be more different than each other; the Borobudur Temple is a Buddhist temple whereas the Prambanan Temple is a Hindu temple. Both these temples do have some things in common though, such as its ancient historical culture and the many stories behind each intricate detail of its structure. 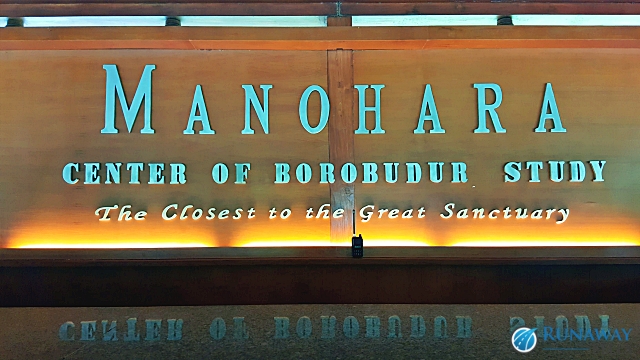 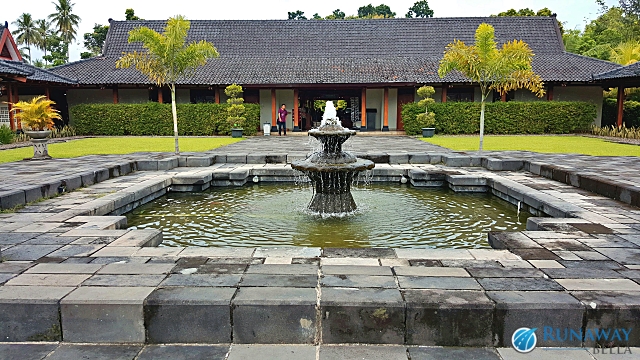 My friends and I went to Borobudur Temple (or locally known as Candi Borobudur, “Candi” translated as Temple) from the Manohara, Center of Borobudur Study. There are some histories that you can explore at this center, especially on how, when, why and what Borobudur is. 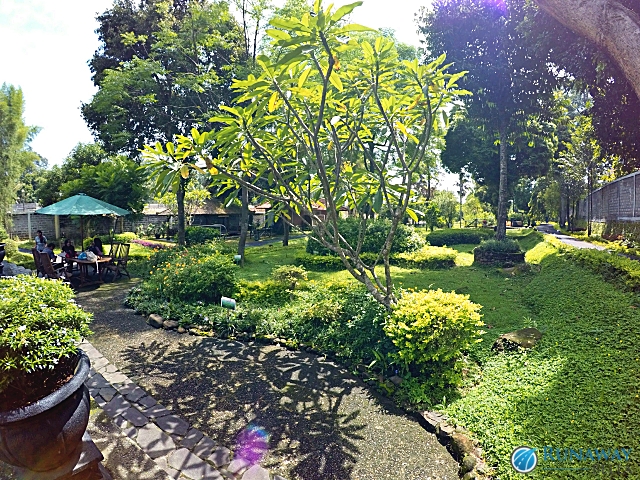 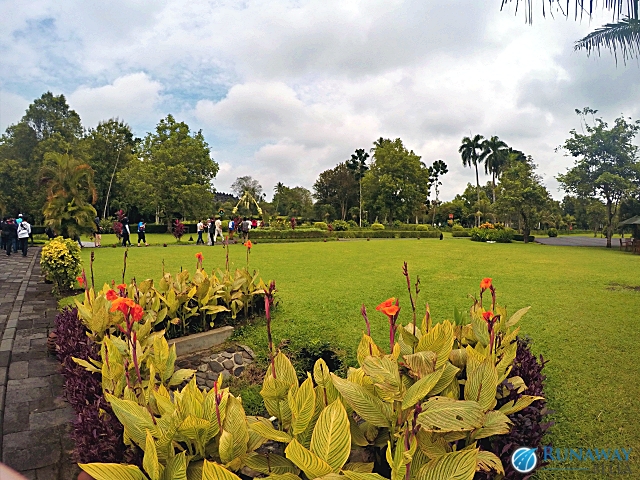 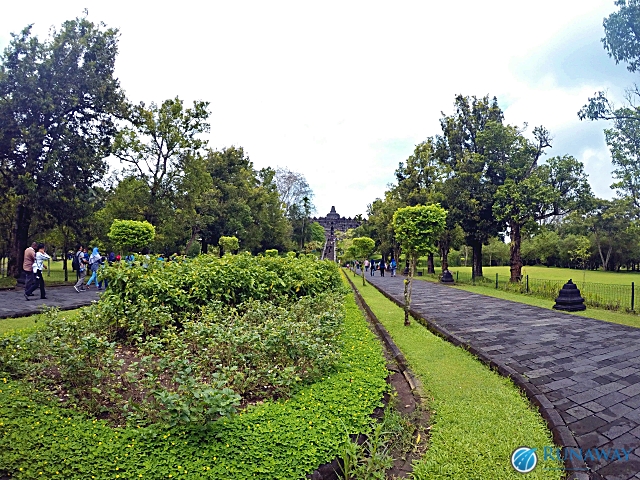 Located in Magelang, Central Java, Borobudur is a 9th-century Mahayana Buddhist Temple. The rulers of Sailendra Dynasty, a notable Indianised dynasty, built the temple around 800 A.D. as monument to Buddha. 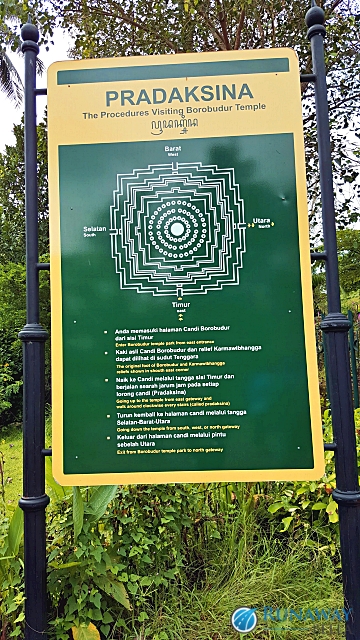 There are some rules you must adhere before entering the temple. Visitors who wears shorts or skirts above the knee will be loaned a “sarong” to cover the legs. You should start ascending the temple from stairs at the East side and move clockwise as you explore the temple. To get down, you can descend from either the South, West or North stairs. 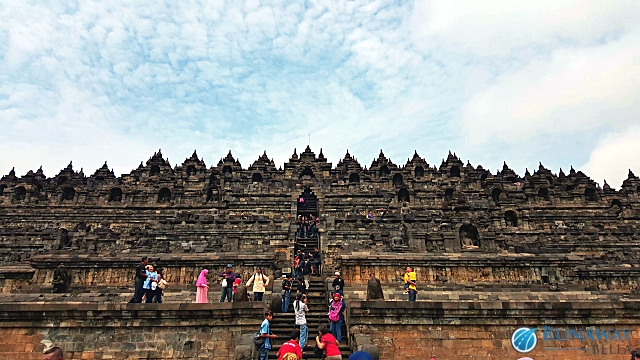 Even from a distance, you can see the immens size of the Borobudur temple. Even at a glance, you can’t miss the intricate designs and facets of the temple. As I stood at the bottom of the temple gate and looking up, I was overwhelmed by the size of it and also at awe at how the people (or slaves) from many years ago managed to build such a temple.

The temple covers a total surface area of 2,500m2 with walls and balustrades. It is known as the world’s largest Buddhist temple with 9 stacked platforms – 6 square and 3 circular topped with a central dome. They are decorated with 2,672 relief panels and 564 Buddha statues. The most interesting part of the temple is that the Central dome is surrounded by 72 Buddha statues and each of them are seated inside a perforated stupa. 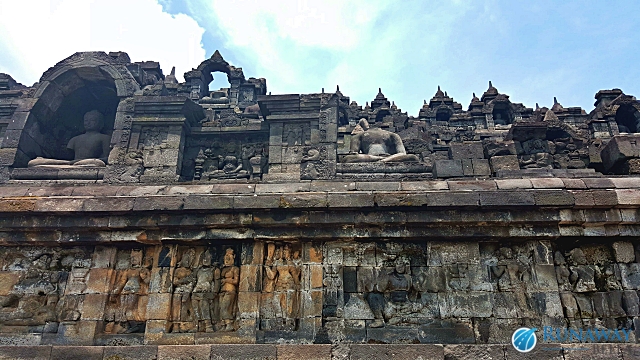 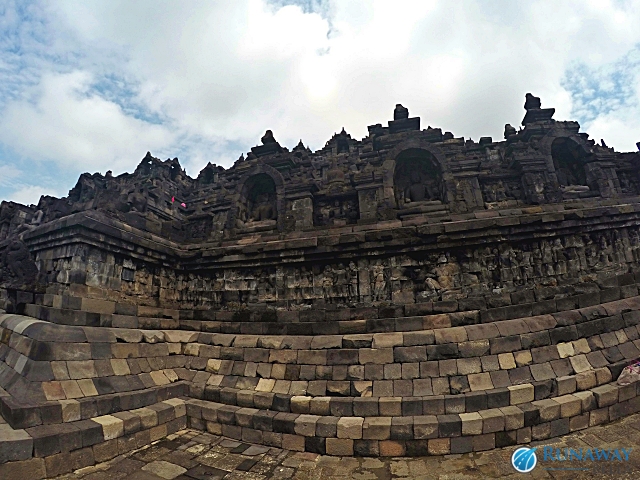 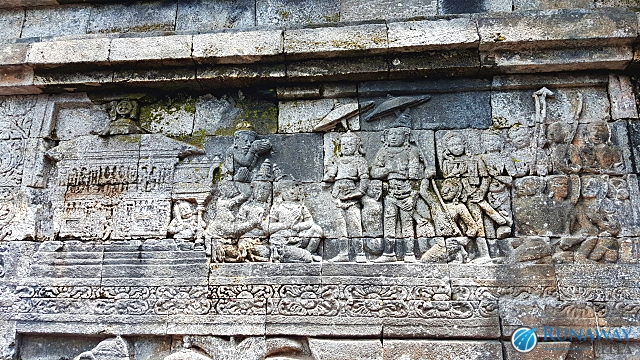 I loved the corners of the temple, hiding me from view of visitors from the other side. Most of the time, the corner walls have sculptures that tells a story and sometimes the stories connect with another sculpture from another wall section. 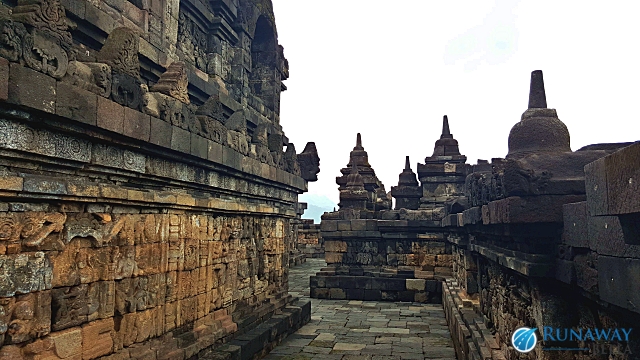 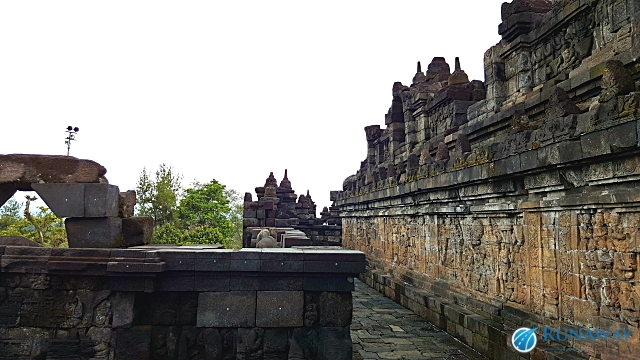 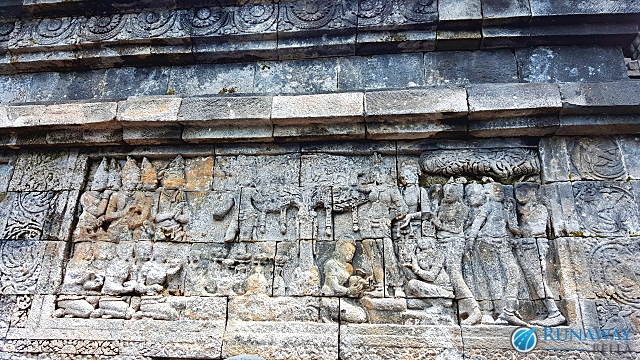 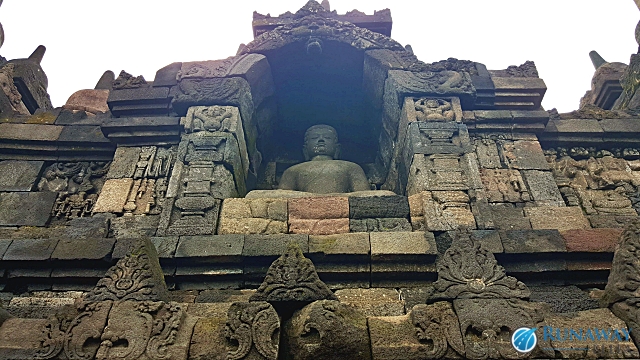 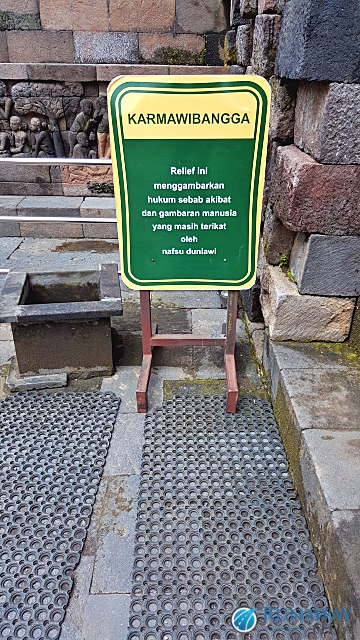 Borobudur Temple’s vertical division and divided into three: base, body and superstructure. Coincidentally, this coincides with Buddhist cosmology that the universe is divided into 3 superimposing spheres, which are:

As I arrived on the level of Arupadhatu, my breath literally left my body because of the amazing view. Not forgetting to mention the stupas that brought the natural artistic side of me. I wished I could draw then because it was quite a sight.

The stupas at Borobudur Temple is one of the main attractions of the temple. It is definitely one of the reasons why most visitors would climb to make it to the top of the temple and see for themselves Borobudur’s superstructure!

Looking at the photos below you would agree that they look beautiful right? But actually, Borobudur Temple is popular for it’s Borobudur Temple sunrise tour where you could see mist near the stupa and yeah, NO SWEAT even when you’re at the top most structure! 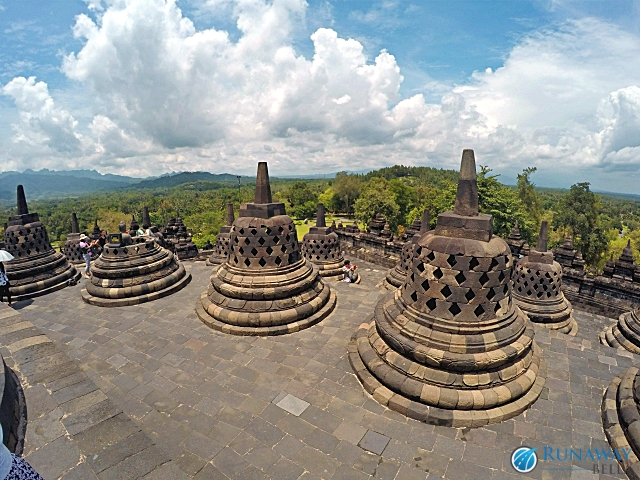 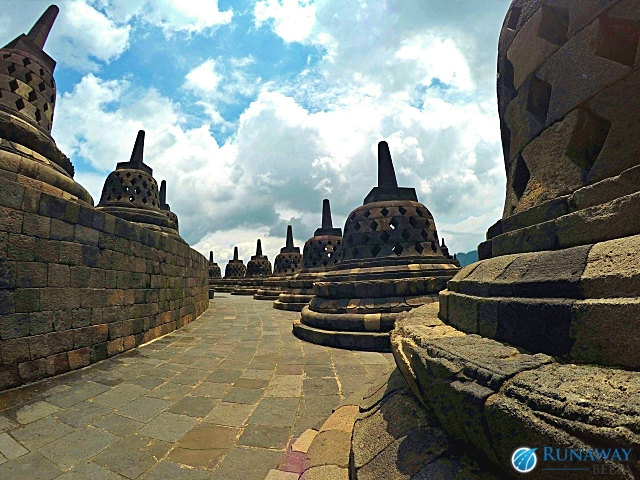 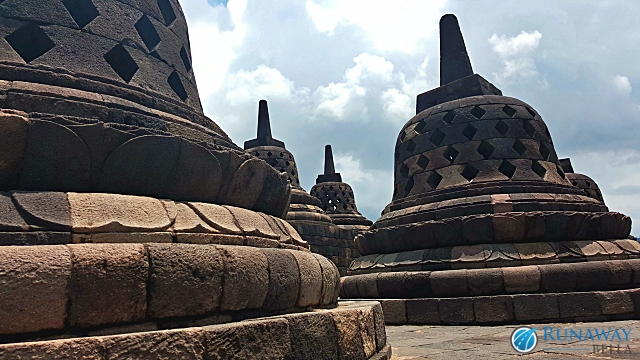 There are actually many people at Borobudur Temple when I was there but luckily there were some moments where I was able to take these photos and the other visitors are all out of the frame!

It took me about 3 hours to get from the base to the superstructure at Borobudur Temple. Remember to bring a handfan, hat and slather on some sunblock before you get on the temple grounds because, phew, it could get really hot!

When my friends and I hopped on our transport to go to Prambanan Temple from Tentrem Hotel, we hoped it would not be a very long ride. I was not feeling so well that morning and after an hour’s drive, we arrived at Prambanan Temple.

Prambanan Temple, also known as Rara Jonggrang by the locals is a 9th-century Hindu Temple located in Yogyakarta. Similar to Borobudur Temple, the Prambanan Temple was built in 800 A.D. by the powerful Sailendra dynasty.

Imagine that: a dynasty so powerful that it has slaves and workers building monuments as specific and amazing as the Borobudur and Prambanan.

The Prambanan Compound had over 500 temples but many has crumbled to stone and ruins, mostly due to weather and time as well as natural disasters like earthquakes, volcanic eruption and shifts in political power in the early 11th century. It is only rediscovered in the 17th century.

Prambanan Compound consists of Prambanan Temple, Sewu Temple, Bubrah Temple and Lumbang Temple. This compound is actually located on the border between Yogyakarta and Central Java. The famous temple that receives many visitors yearly is definitely the Prambanan Temple.

Prambanan Temple is dedicated to Trimurti (or the three forms) which are: the expression of God as the Creator, the Preserver and the Transformer. 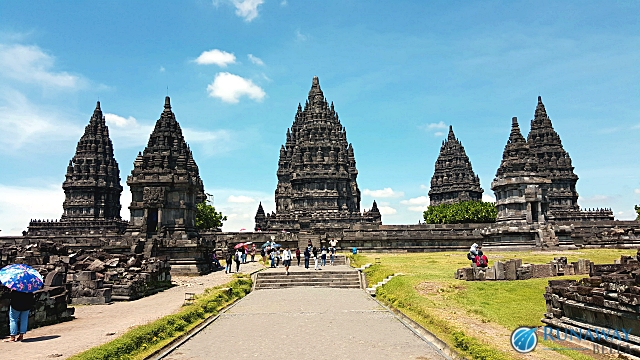 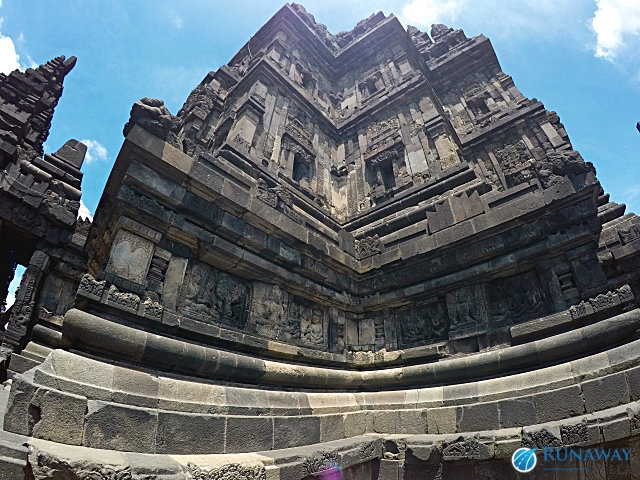 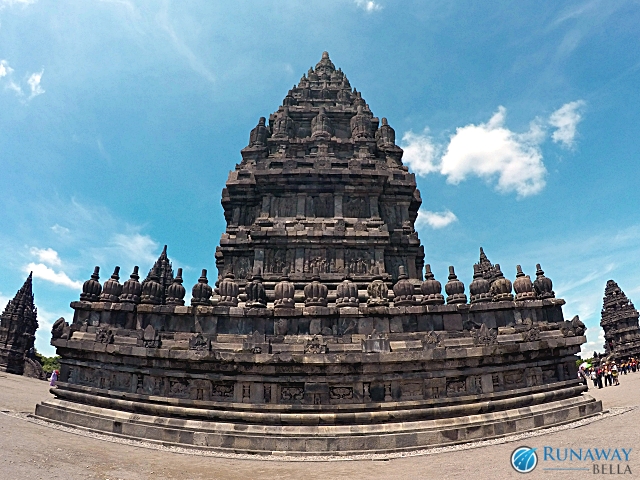 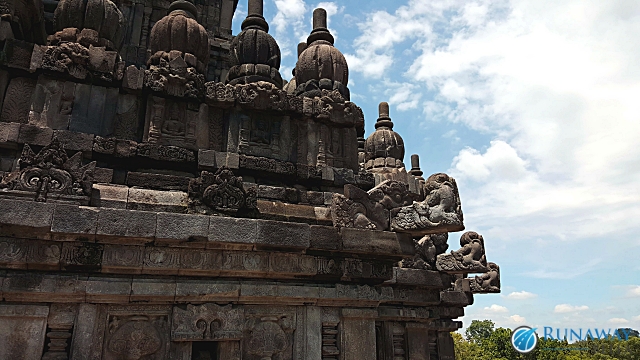 The largest temple of Prambanan is dedicated to Lord Shiva. At the last and above of the concentrated squares are 3 temples. At these temples, there are sculptures illustrating the epic of Ramayana which is dedicated to the Lord Shiva, Lord Vishnu and Lord Brahma. There are also 3 smaller temples that are dedicated to the animals that serves them.

Now my friends and I arrived at the Prambanan Temple right at noon. The sun was scorching hot and there were many Indonesians renting out umbrellas at IDR5.000 to visitors. I had to have one, especially since my dumb ass didn’t bring a hat nor sunglasses. But yeah, luckily I had my handfan. I would suggest you to try the Prambanan Sunset Tour though for then the sky would look so much more beautiful. 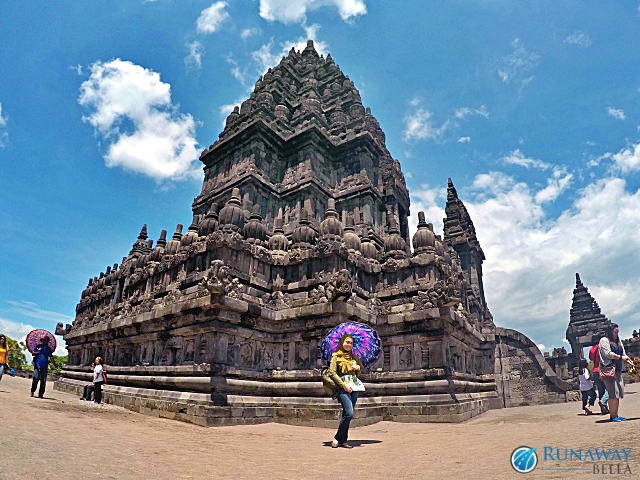 Just like Borobudur, there are information on boards (although slightly obscured at some places) that explains the meaning of some sculpture and structure of the temples. Since there were so many visitors inside the temple – taking photos and videos for long period of time, I felt suffocated standing too long in the cramped space and was unable to take photo of the inside part of the temples.

Yeah, I feel anxious in small spaces so yeah, no photos for that.

However, walking slowly around the temple compound and immersing in the centuries-old structure and imagining the blood, sweat and tears that contributed to the building of these structures was enough to leave me in wonder.

When you visit historical places such as these temples, I would suggest you to imagine what it must be back in that era and the work that was put in to create such formations.