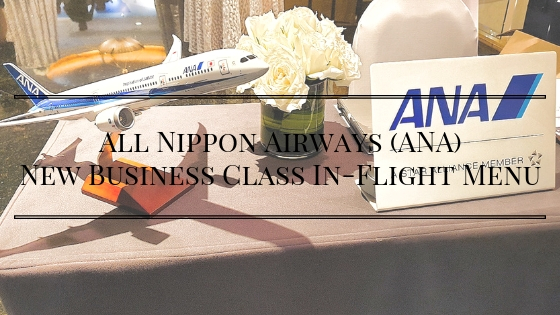 It was a cloudy day yesterday when I arrived at Shangri-La Hotel, Kuala Lumpur for All Nippon Airways’ (ANA) “Business Class and In-Flight Menu Tasting Experience” but the rain that followed shortly after my arrival did not dampen my mood or make me any less excited for the experience.

I have never flown via ANA before but I have heard many good reviews on it – ANA being Japan’s largest 5-star airline for six consecutive years from SKYTRAX. Also not forgetting to mention that ANA has also been recongnized by Air Transport World three times in the past 10 years – in 2007, 2013 and 2018 as “Airline of the Year”.

Because of this, I was looking forward to see the type of mouth-watering menus that ANA would bring its business class customers.

Have you been to Zipangu in Shangri-La Hotel Kuala Lumpur before?

Zipangu restaurant exudes calm and serenity in its warm woody feel, water flowing over stone and glass, and in the bamboo garden that surrounds it. The Tokyo-style brasserie stands out for its spacious open kitchen featuring sushi, teppanyaki and tempura counters. Diners can also sit at these counters and watch chefs at work as well as interact with them.

Reading the description of Zipangu restaurant above surely sounds like an absolute gorgeous place, isn’t it? I have never been to Zipangu or tried the food before which was one of the reasons I was looking forward to trying out the new Business Class in-flight menu by ANA.

The chef who was in charge of planning, curating and deliver the in-flight menu is none other than Chef Nao Takeshita – a renowned chef of over 25 years of culinary experience. Chef Nao Takeshita has had expeience working with Nadaman restaurants in Tokyo, Osaka and Fukuoka for 20 years.

No doubt due to his extensive experience and skills, Chef Nao Takeshita managed to create the perfect Business Class in-flight menu for ANA in just 3 months.

Not forgetting to mention the VIPs who graced the event yesterday and how they encourage the medias to try out the Business Class seats available to their heart’s content and also to enjoy tasting the new in-flight menu.

So what are the delicious menu that ANA’s Business Class flyers can expect?

Imagine having ANA’s pretty stewardesses serve you all this at your Business Class seat as you’re enjoying the movies on your screen?

Along with tasting the new in-flight menu for ANA’s Business Class flyers, medias were also able to get a VR experience of ANA Business Class as well as try out the business class seats for themselves.

The event will be in Shangri-La Hotel Kuala Lumpur for four (4) days so if you’re interested to try ANA’s Business Class New In-flight Meal yourself or check out the VR experience or even lounge on the business class seats, do e-mail my-event@ana-campaign.com before going there (you will be given a confirmation email and time slot).

There’s also a competition on-going between ANA, Shangri-La Kuala Lumpur and Zipangu. All you have to do is:

Winners would walk away with:

Winners will be announced on 10th April 2019 on ANAxSLKLxZipangu website and ANA Facebook so check out if you’re the winner soon!