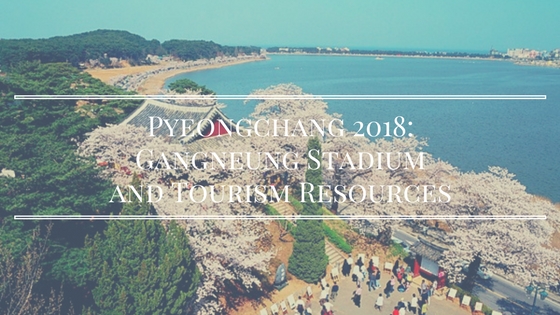 Gangneung is located on the East Coast of South Korea. It is the economic centre of Yeongdong region of Gangwon province. It has many tourist attractions like Jeongdongjin or Gyeongpo Beach.

Located near coastal area, it is no wonder that Gangneun, with it’s total area of 1,040 km2 is chosen as the Winter Olympic’s coastal cluster. By 2018, there will be 5 working stadiums available at Gangneun. These stadiums includes:

With an annual weather averaging at 13.10C (lowest at -11.80C, highest at 36.10C), it is no wonder that Gangneung has many visitors throughout the year. Also, because it is the home of South Korea’s National League Football Club – Gangneung City FC and the K League Football Team – Gangwon FC.

I must say, as I looked through the photos of some of Gangneung’s Stadiums that are still in building progress for Winter Olympics 2018, I am very impressed and a little blown away. The structure are modern, the paintings used shows that it is the building of the Millennial, but the design still has some of the South Korean’s flavour and essence to it.

There are 5 stadiums that are prepared for Gangneung area and they are:

This is an indoor stadium. Costing 108 billion Won (about $90 million US), Gangneung Hockey Centre will serve as one of two stadiums for ice hockey events, serving as main venue for men’s tournament and medal matches. host the ice sledge hockey competition during the 2018 Winter Paralympics.

This stadium will be used for speed skating events. It consists of a double track 400 metre rink and has a capacity of 8000 seats. The original plan was to build the venue at the Gangneung Science Park, but because there was limited space due to the number of local businesses taking the opportunity to relocate, the oval will be built in the Gangneung Olympic Park, in the vicinity of the Gangneung Ice Arena and Gangneung Hockey Centre.

This USD 85 million indoor arena will be the venue for two sports: figure skating and short track speed skating. It has 12,000 seating capacity. The building has four floors aboveground and two underground levels. An environmentally-friendly ice cooling system has been adopted, and the facility will be used for local recreational purposes after the Games.

With a capacity of 3,500 seats, this will be the venue for curling and wheelchair curling. This centre is an indoor ice arena which was used for the 2013 Special Olympics World Winter Games, and will be used for both the 2018 Winter Olympics and 2018 Winter Paralympics. The Centre was the venue for ice hockey at the 1999 Asian Winter Games and hosted the 2009 World Women’s Curling Championships.

This centre is the other one of the two ice hockey venues for Winter Olympics 2018. Established on the grounds of Catholic Kwandong University in Gangneung, Gangwon-do, the centre will fit 6,000 capacities. There will be one ice rink (60m x 30m), four floors aboveground and one underground level.

Now, let’s talk about how we can spend our time in Gangneung enjoying ourselves and visiting exciting places when there are no Olympic games to watch.

What I like about Gangneung is that, the tourist attractions are filled with historical and cultural designs. Of course there are the modern-looking newer buildings to be awed at, but I’ve always loved visiting historical buildings and sites to learn and see for myself how the past has shaped the current culture and people.

Here are some of the places in Gangneung you and I can visit:

The name Ojukheon House came from the many black bamboos that surrounded the house. If you have seen South Korea’s largest Won denomination, you will notice it is of the picture of someone named Sin Saimdang.

Sin Saimdang lived in Ojukheon House with her son Yi I (who is a famous scholar and politician of the Joseon Period) in this house. The house was built in the time of Joseon’s 11th King, King Jungjong (1506-1544). Ojukheon House remains as one of the oldest wooden residential buildings in Korea. In 1963, this house is named as the country’s “Treasure No 165” and is maintained throughout the generations.

“Seon” means boat. Since Gyeongpo Lake was directly in front of Seongyojang at the time it was built, thus making the house accessible by boat. At one time, Gyongpo Lake was 12km in circumference. Now it has reduce to only about 4km and depth of 1-2 metres. It is said that 10 generation of Naebeon Lee has lived in this house.

This classic house was even designated as South Korean’s “Important Folklore Material No. 5” in 1967.

The name “Haslla” comes from Gangneung’s Shilla Era. Haslla Artworld has an Art Garden which has different sections like the

There is a specific area for children to play, create their own artwork and observe nature too. This place is suitable for art lovers out there.

Jeongdongjin Rail Bike can probably boast to you about it’s view. It is the only rail bike track in South Korea that is closest to the sea so that visitors can spot the sunrise while on track from Jeongdongjin station. At the same time, there are of course activities that can be done at the beach too. So after you tire yourself from riding on the rail bike, you can visit the beach with your loved ones for a fun activity!

If you are a coffee lover, this is probably going to be your favourite street. It is said that Gangneung is the city of coffee so I’m sure the coffee prepared here are all delicious and tasty. What’s better is that Anmok Coffee Street is nearby the sea so you can enjoy a sip of your coffee while enjoying the beautiful view and sound of the ocean.

If you’re a fan of the Korean Drama “Goblin: The Lonely and Great God” starring Gong Yoo (Kim Shin) and Kin Go-Eun (Eun-Tak), then this is one of the setting that you cannot miss to go to. Visitors throng this location just to re-enact the scene from the drama. It is a romantic setting and although the wind can be quite strong, the view itself is breathtaking.

A definite must go for me!

This fishmarket is located next to the Jumunjin Port where you can find many large fleet of squid boats. Jumunjin Fishmarket is popular among both local and international visitors because of the fresh seafood caught near the East Coast like, squid, mackerel, pollacks, pikes and crabs. Visitors can purchase these at very cheap prices and even taste the fresh sashimis on the spot!

Not forgetting to mention, the market also hosts fun events such as the Blowfish Festival and Squid Festival.

One thought on “Pyeongchang 2018: Gangneung Stadium and Tourism Resources”