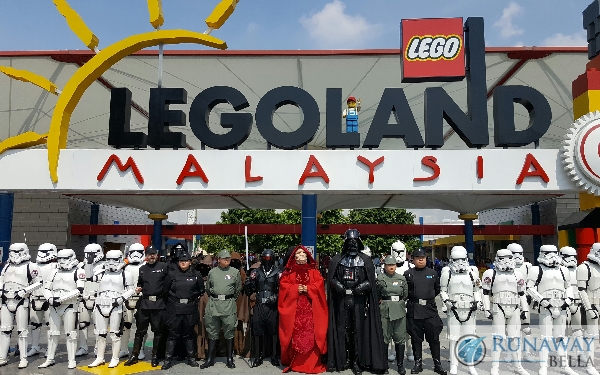 It was an exciting weekend for LEGO and Star Wars fans in Malaysia – or neighbouring countries – when Legoland Malaysia Resort brought LEGO Star Wars Days to us last fortnight. The LEGO Star Wars Days was held from 6th – 8th May 2016, where we saw the Imperial March by the 501st Legion, the building of the replica TIE-Fighter – to pair with the replica Millennium Falcon that was build the week before, the announcement of the winners of My Own Creation (MOC) and also on-going competitions for visitors and LEGOLAND Malaysia Facebook Fans alike!

Have you ever heard of 501st Legion?

The 501st Legion is an all-volunteer organization that gathers lovers of Star Wars – mostly the Dark Side, by promoting interest in Star Wars and joining Star Wars related events. Apart from that, the group also takes their time to contribute to the local community by joining charity events and give back to the community.

The best part about the 501st Legion? They do everything in their Star Wars costumes.

There are an array and mixture of Star Wars costumes worn by the 501st Legion. The best, in my opinion is of course, Darth Vader. There’s also the Emperor Palpatine, Kylo Ren, Stormtroopers, Shadow Troopers, X Wing Fighter Pilots and many more. The costumes are all personal owned and in order to be a part of the 501st Legion, you’ve got to own your own Star Wars costume.

It was definitely a sight to behold, and for fans of Star Wars, a photo opportunity with the two bad-a*s of Star Wars shall not be passed.

If you would like to join the 501st Legion, you can learn more about them by going to this website.

With entries from Taiwan, Hong Kong , Indonesia, Singapore and within Malaysia, the My Own Creation (MOC) competition is opened in three categories which are:

The international (outside Malaysia and Singapore) entrants won for each category whilst Malaysians and Singaporeans have five winners per category.

The objective of the competition was to showcase hidden talents of both children and adults alike in building Star Wars Legos with their own imaginations. The competition is also to bond parent and child together through the process of building their creation together as well as allowing the process of planning and eventually, finishing the project. All built showcases will have to use only original LEGO bricks.

The outcome? Many great ideas and creations. I’m sure it took the judges a long time to go through each one.

Most of the participants are parent and child, which was definitely a great bonding time for the family.

So what are you waiting for?

Check out this video on LEGO Star Wars Day and see for yourself!

Thank you to Gaya Travel Magazine and LEGOLAND Malaysia for this amazing trip. Thank you Aan for the gorgeous photos!