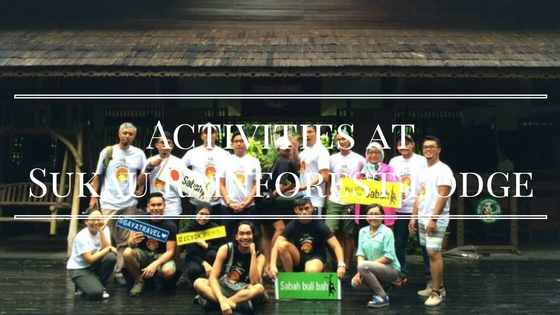 Staying at Sukau Rainforest Lodge was a new experience to me, and it was something really memorable. But my friends and I were not just staying there, we also did some activities during out stay.

What I Did At Sukau Rainforest Lodge? 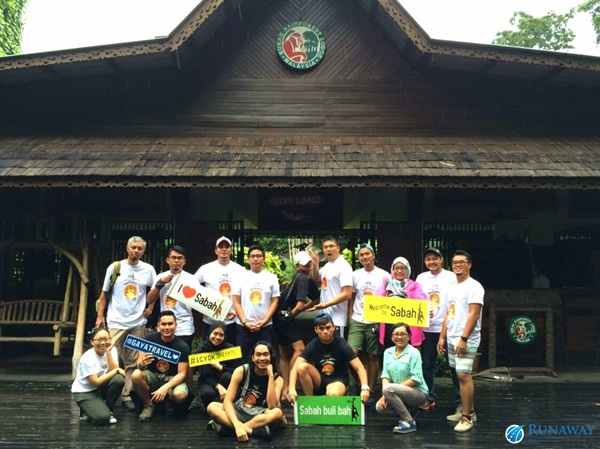 My friends and I arrived at Sandakan Airport in the afternoon and we straight away went for lunch. After that, the bus brought us on a two-hour journey to Sukau. It was already dark by the time we arrived. We headed to the jetty to be transferred to the lodge. Luckily, our luggage transfer was handled by the Sukau Rainforest Lodge’s staffs.

Since we were only at Sukau Rainforest Lodge for one night, the itinerary was slightly packed. After we arrived at the lodge and had our dinner, we started our first tour – the Night Wildlife Cruise.

I have to say, I salute our boatman. He can spot tiny wildlife and birds in dark corners of the trees 30 feet away with just one spotlight. And he had to manouver the boat too!

I, on the other hand, is not only short-sighted but blind as bat to anything in the bushes unless it shone brightly about 1 feet in front of me. Hence once I spotted the Kingfishers and all the other birds, I quickly snapped away on my camera. My camera lens aren’t as sharp as I hoped it to be though. So, I didn’t get to capture photos of some of the other wildlife.

Everyone on my boat was hoping for a crocodile or two to make a grand appearance that night. But according to the boatman, it is high tide season now so the crocs are mostly underwater. I was a mixture of sad and gratefulness because I didn’t know what I would do if a croc was to surface right next to me on that very small boat.

We were elated however, to see a herd of pygmy elephants. They were a little shy but I’ve always loved elephants and to see wild elephants right in front of me made me forget about my camera. According to the boatman, we are lucky because pygmy elephants only come out once in a while.

The Night Wildlife Cruise took about an hour.

After we had our breakfast the next morning, we hopped on the boat to go for our Morning River Cruise. We were told that the river cruise would take about 2 hours. 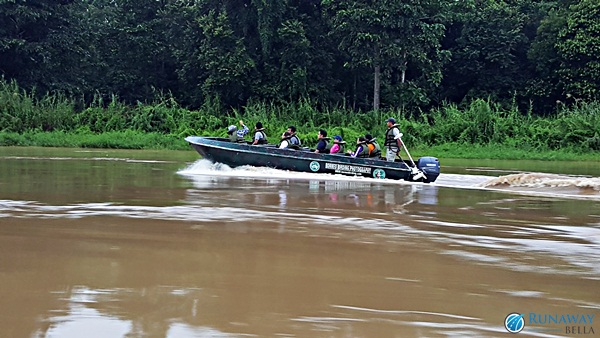 The morning cruise began with more wildlife spotting. We saw a few species of Kingfishers, many Proboscis Monkeys, Snake Eagles and other birds too.

Journey to the Kelenanap Oxbow Lake was wet for us since it rained non-stop. The chilly weather was a little dampening to the excitement too. Luckily when we arrived at the lake, the rain stopped for a while. 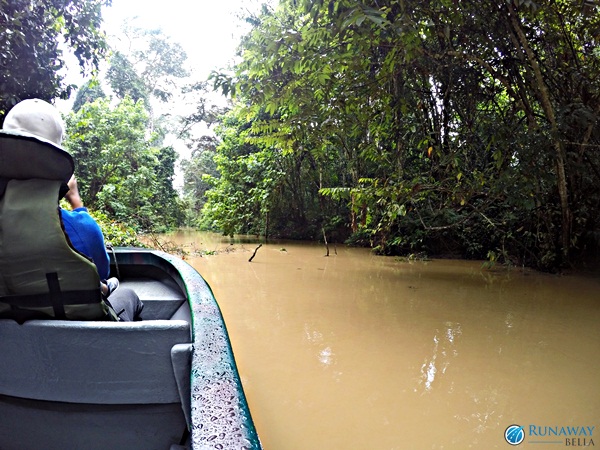 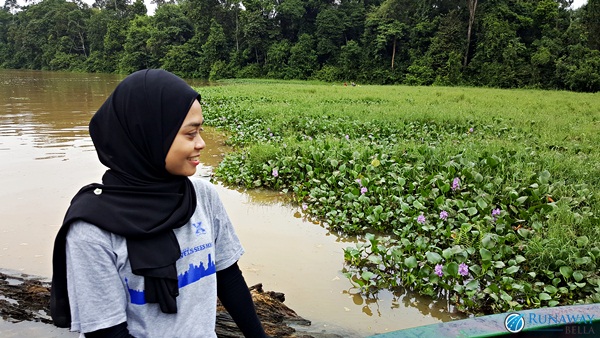 There was one couple having breakfast in their boat as we arrived near the Water Lilies. The lake was quiet, with less noise from insects or animals in comparison to when we were on Kinabatangan River. A romantic breakfast is ideal at a place like this. But, one must definitely be aware of one’s surrounding.

After returning to the lodge, we then had an educational tour along the lodge’s Hornbill Boardwalk. 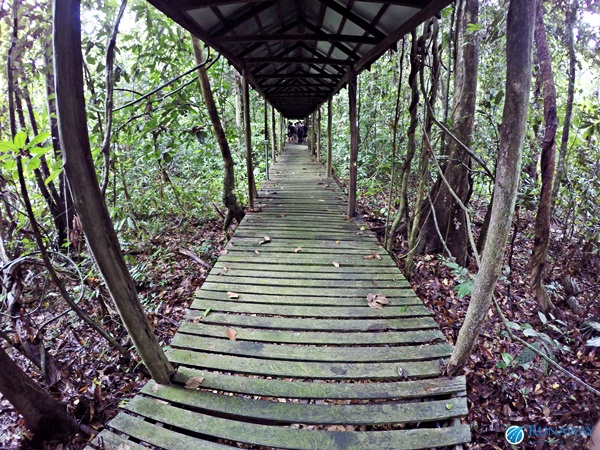 Many thanks to our guide from Borneo Eco Tours, so many questions (that we didn’t even ask yet) were answered about the Hornbill Boardwalk, the elephant trails, the plants, the insects and many more. Some of the insects found here were larger-than-your-backyard-insect in size. 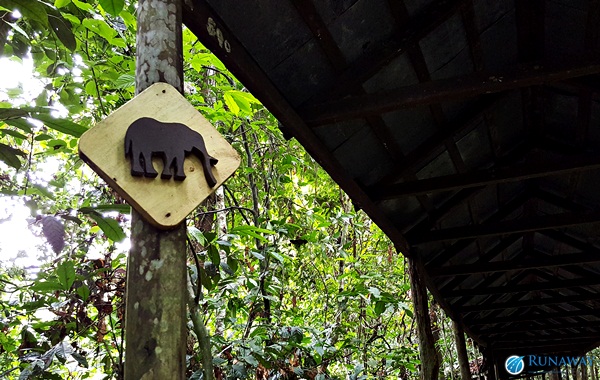 There are elephant trail signs near the boardwalk. Some of the rooms at the back of the lodge are made of strong wood so that if elephants accidentally hit the rooms, it won’t be damaged. However, we were told that the elephant trails are not used for a while now. 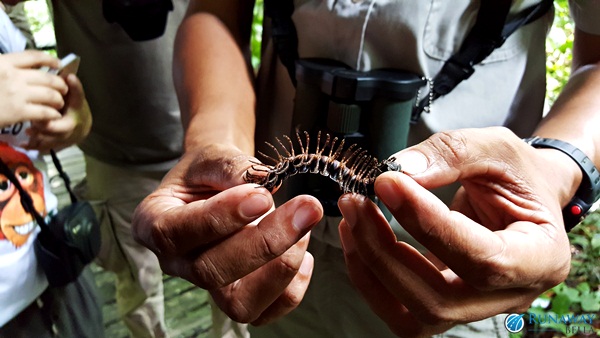 The millipede above, for instance, will release a toxin that is very similar to cyanide when it feels threatened. The toxin smells like almond and if it is sprayed into your eyes, it could cause blindness. If your eyes got sprayed, quickly wash it with running water. The dude above is considered a baby millipede and there are many of them, especially on leaves. 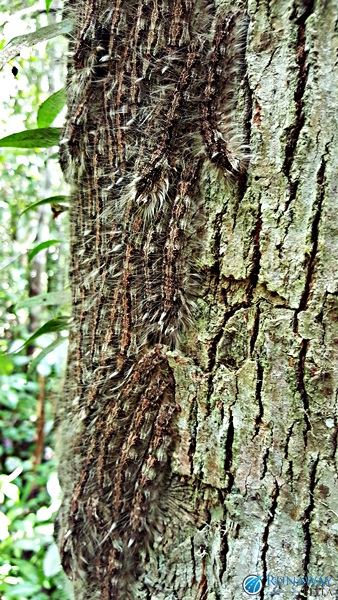 Look at the photo above. If you think that is a photo of a normal tree trunk, look again. Do you see those hairy things? Those are caterpillars. Large, long and so many of them. The caterpillars covered the whole length of the tree trunk actually – although my photo only showed a short portion of the tree. They are moving upwards, probably to rest in their cocoons before turning into something else.

Do you like to learn about insects, plants and animals in the jungle?

Our Hornbill Boardwalk ended with a short history on Sukau Rainforest Lodge told by our guide. It is very interesting to know about Mr. Kari bin Ongong. There were also photos of during one rainy season and the tide got so high. Love the stories and history behind the lodge.

Sukau Rainforest Lodge offers tours of different rates for high and low season. You too can experience what my friends and I had by checking out the packages offered here.

18 thoughts on “Activities To Do At Sukau Rainforest Lodge”