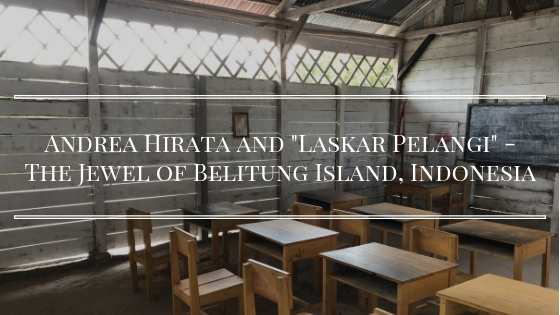 Published in 2005, not many imagined that Andrea Hirata’s debut novel “Laskar Pelangi” (translated as Rainbow Troops) would be as celebrated and loved as it was today.

Based on a true story of Andrea Hirata’s own experience during his schooling days in Belitung, the novel was celebrated in many countries around the world, won numerous awards and was even translated into more than 40 different languages.

Laskar Pelangi was the first novel of a tetralogy. The other books of this tetralogy are: Sang Pemimpi (The Dreamer), Edensor and Maryamah Karpov.

Located in Gantong, East Belitung, Museum Kata Andrea Hirata was opened in 2010 and became Indonesia’s first literary museum. Opened by Andrea Hirata himself, he wanted the museum to be a place where the local community can immerse themselves in words and knowledge as well as learn – from the free lessons he or sometimes, a guest teacher gives at the “Sekolah Gratis Andrea Hirata” (Andrea Hirata’s Free School).

It is not very hard to spot Andrea Hirata’s Museum Kata because of it’s colourful façade, inviting happy thoughts in everyone who sees it. And just like an instagrammer, my husband and I just couldn’t pass up the opportunity to take as many photos as we could outside of the museum.

Oh, but wait. You might think that this is just like any other “museums”, but as you step into the area inside, you would be equally surprised and excited to see the many colourful windows, doors, pavillion, rooms, classroom and trees that surrounds the museum. Museum Kata is a very peaceful and interesting concept.

Walking inside the museum, it is hard to miss the many famous quotes drawn and painted across the walls and floor. If you’re a literary fan, you would enjoy the book displays in the museum too. As you walk through the rooms, at the end of the main Hall, there is a coffee shop called Kopi Kuli for you to enjoy a cup of Indonesia’s good ‘ol Black Coffee or fried fritters.

Apart from a coffee shop, there are also some local souvenirs you could buy at the small souvenir shop next to the coffee shop. Quite cheap price, considering it’s in a museum.

But then again, don’t limit yourself to just the main hall. There’s the garden, the Pavilion and the classroom (for free classes) for you to roam around freely and absorb the bold written words from.

My husband and I stayed at this museum for hours and we didn’t feel like leaving it by the end of the day. We loved this place so much we came here twice. It was a very enjoyable experience.

“Laskar Pelangi” is not just a popular novel but also a popular movie with its own local followings and international fans. The movie, released in 2008, is based entirely on the novel, about a group of 10 students in the 1970’s who struggles with poverty and develops hopes for the future of Gantong Village through farming and tin mining at Belitung Island.

In the novel and movie, the 10 students studied at a school called SD Muhammadiyah, a luxury that most parents of the area does not usually believe in. The school played a huge part in the lives of the characters of the novel, hence it is no wonder why Belitung Island created a replica school especially for the fans of the novel and movie.

If you have not read the novel or watched the movie, the novelty of the school might not rub on you as much as those who loved the novel and movie but, it is still a good place for you to visit as one of Andrea Hirata’s tour “trails” in Belitung Island.

If you’re lucky, sometimes local children would put on the kaolin clay on their faces and bodies, depicting the children back in 1970’s when Belitung Island was popular with tin mining. You could take photos with these children if you’d like, but remember to ask permission first!

What’s interesting about Tanjung Tinggi are the great big rock formations around the beach. The locals said there are 5 different rock types that can be found at this beach which are: Batu Bakpau, Batu Bebek, Batu Kodok, Batu Belah and Batu Gantung.

I however, could not distinguish one rock with another to save my life. So rock enthusiasts, if you’re interested in natural rock formations, you would love Tanjung Tinggi!

Tanjung Tinggi Beach is also another place to include in your Area Hirata-Laskar Pelangi “trail”. This beach is one of the of the shooting locations in both the movie Laskar Pelangi (Rainbow Troops) and Sang Pemimpi (The Dreamer).

The clear light green waters are warm to the skin as I dipped my feet in. The sea waters could be rough during wet season with waves hitting the large boulders so if you come here by then, be extra careful because it can get really slippery and dangerous.

Some water activities can be found here like kayak and there are many stalls selling water and food around too. But guys, please keep the beach clean and protect the sea and its living creatures. I saw many used plastic all over the place (since it was very windy, many plastic were blown to the shore) and we all know how dangerous plastic are to sea creatures.

Keep our planet clean, safe and beautiful for our children and their children. At the same time, let’s bask in the beauty of nature and enjoy our travels!

This trip was made possible by MTN Getaways Pte Ltd; helping Malaysian and Singaporean travelers who would like to choose Belitung Island, Indonesia as their next travel destination.

15 thoughts on “Andrea Hirata and “Laskar Pelangi” – The Jewel of Belitung Island, Indonesia”