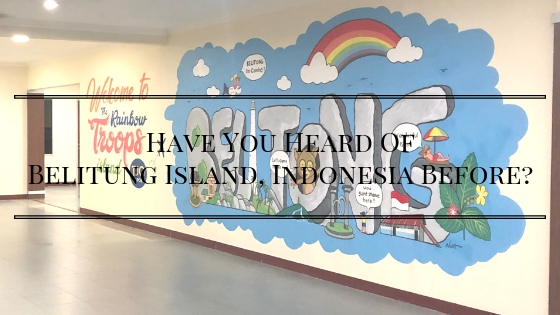 Located in the east coast of Sumatra, Belitung is one of Indonesia’s islands and used to be the second largest tin mining producer in the world.

How to Go to Belitung Island, Indonesia?

There are also flights from Jakarta to Belitung Island with more choices of airlines such as Garuda Airlines, Lion Air, NAM Air, Citilink and Sriwijaya Air. The frequency of flights are more when you fly from Jakarta.

Upon arriving at HAS Hanandjoeddin Airport, it reminded me of Boracay Airport – the small-scale airport and the immigration officers at only two different desks to check our passports. It took a while for all of our passports to be stamped but the environment was oddly poignant to me.

What Can Be Found at Belitung Island, Indonesia?

Oh, there are many things that can be found in Belitung Island, if you’re one who loves nature, intellectual things and of course, history! I love all three of these and this is probably why it was so easy for me to fall in love with this island.

So let me start with nature:

How can we deny the beautiful white sandy beaches of Belitung Island? Leebong Island, Tanjung Tinggi and Tanjung Kelayang are some of the uninhabited beaches that are still not developed on a large scale so you will still be able to enjoy the natural beauty of these beaches. I hope that even if they are developed in the future, the locals will work hard in keeping the beaches clean, beautiful and away from destructive tourists.

Have you heard of the writer Andrea Hirata or his most well known book “Laskar Pelangi“? Laskar Pelangi or translated as Rainbow Troops in English has been translated into more than 40 languages and is one of Indonesia’s international best sellers of all time.

If you’re a fan of literature, then Belitung Island is one of the best places for you to visit since Andrea Hirata even has a museum he named “Museum Kata” (or Words Museum) – a place to immers in both fiction and non-fiction compositions.

Belitung Island, Indonesia has a great history and lesson to both locals and visitors of the island. Through your exploration of the island, you would be able to:

Why Belitung Island, Indonesia Should Be Your Destination In 2019?

During my visit to Belitung Island, Indonesia last December 2018, I found out from the local guide that there are plans by private companies in Belitung Island in turning it into the next Bali.

If this is true, then you can expect throngs of tourists and visitors coming to Belitung Island, and before you know it, you wouldn’t have the chance to explore the island leisurely and get to know what the island has to offer more intimately like I have last December.

For example, even Leebong Island is a private island and is now undergoing some “renovation” to turn it into a private resort in the future.

Since Laskar Pelangi took off and gained many fans from all over the world in both the book and movie, there have been large numbers of visitors coming to Belitung Island, Indonesia to visit Andrea Hirata’s Museum Kata and the places where they shot the movie Laskar Pelangi such as the replica school of Laskar Pelangi and Tanjung Tinggi beach.

Best time to come to Belitung Island would be during the dry season between April to October. The weather are mostly sunny and sometimes windy.

If you come during rainy season between November to March, prices of hotels and rentals (car/ bike/ taxi/ etc) may be cheaper but it could be rainy most of the days resulting in choppy waters.

School holidays in Indonesia starts from June and ends in July and many locals tourists love to visit Belitung Island then. Similarly, weekends also sees higher number of local visitors, mainly from Jakarta.

So, plan your trip well and make sure to have a lot of fun!

This trip was made possible by MTN Getaways Pte Ltd; helping Malaysian and Singaporean travelers who would like to choose Belitung Island, Indonesia as their next travel destination.

One thought on “Have You Heard Of Belitung Island, Indonesia Before?”