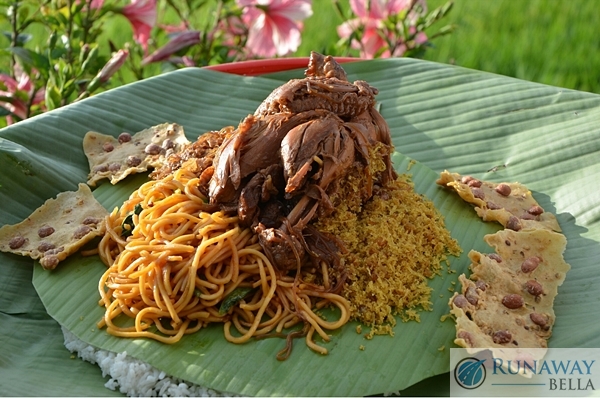 I wouldn’t really say that I’m a foodie since I don’t hunt for food places just to try different food, but I wouldn’t mind trying out new food when I travel. I’m more adventurous when I travel. In this case, even though I only traveled within Selangor – the state that I reside in – it is my first time to try some of the more exotic features on the plate. I’ve heard of exotic food available in Selangor but never really make the effort to come here myself.

Apart from exotic food, I also tried the more traditional form of food in Sabak Bernam, where the people here are of Javanese descent and the food are Javanese influenced.

Here are my thoughts between the Exotic Food vs Traditional Food in Sabak Bernam, Selangor.

When I was told that we were going to try out exotic food at Restoran Lembah Bernam, I wonder if I could stomach porcupine meat, among others. But never one to say no to something new, I told myself that I should try the porcupine meat and anything else that comes in front of me – as long as they’re Halal. So, there I was with other media friends at the restaurant waiting for our food to arrive when, one by one they were presented in front of us.

Glancing at the food in front of us, it didn’t seem so scary. Maybe because the Porcupine (Landak) meat was cooked as a Rendang, which happens to be one of my favourite dish. There’s also venison meat cooked as Black Pepper Venison (Daging Rusa Masak Lada Hitam).

So how was my first experience eating the porcupine meat? It was slightly tough for my preference. I had to chew many times before swallowing it. I was told that if the porcupine meat was cooked with soy sauce (masak kicap), it would’ve been better instead of cooked as Rendang.

The venison on the other hand, is soft and very much to my liking. I helped myself to a second helping with the venison. And everything was made more delicious when the rice is added with some belacan or shrimp paste.

Honestly, I wouldn’t mind coming here again for another set of exotic food. Rest assured that these meat are all Halal.

Have you ever tried exotic food before?

What makes Nasi Ambeng unique is that it is a mixture of a few type of food in one plate. Do you think noodles and rice can’t mix together? Not with Nasi Ambeng though.

Nasi Ambeng is a mixture of plain rice, fried noodles, salted fish, fried coconut floss, vegetables and chicken cooked in soy sauce. Traditionally, all these are served on a big tray lined with banana leaf. Another great thing about Nasi Ambeng is that it is to be eaten together from the same tray. Depending on the size of the tray, you can eat together with a group of minimum of two people up to six or eight people at once.

I find eating together from the same tray – using your hands, no less – is a great way to bond with one another, even if you’re strangers. We had a lot of fun eating, talking and laughing on that day.

At Sungai Sireh Homestay, Selangor, we had a mini “Masterchef” contest and one of the food that we had to make was Rempeyek. Rempeyek is a type of deep-fried crackers that is made of a mixture of rice flour, eggs, coconut milk, water, seasoned salt, coriander, peanuts (sometimes people use corn or anchovies) and anise.

What makes Rempeyek delicious is the right mixture of ingredients and the small fire you use so that the crackers and peanuts are not over-cooked or under-cooked. I’ve never made my own Rempeyek before but I have eaten this on many occasions. Luckily though, the Rempeyek my partners and I did on that day was said to taste very good.

Have you heard of Wadai Kepeng before? At Sungai Sireh Homestay, we were introduced to this delicious dish. From the looks of it, it looked similar to Bubur Puteri Berendam. The ingredients and preparation are similar too except that the Wadai Kepeng is a dessert usually made by the Banjar people.

The gravy is made of coconut palm sugar, coconut milk, pandan leaves, sugar and salt whereas the glutinous dessert is made of glutinous rice flour, a pinch of salt, water (mix it to sticky-like dough) and colouring (if you want). This dessert is best served hot where you can eat just as it is or with bread.

This event was made possible by Gaya Travel Magazine in conjunction with Eat.Travel.Write Selangor Culinary Adventure.