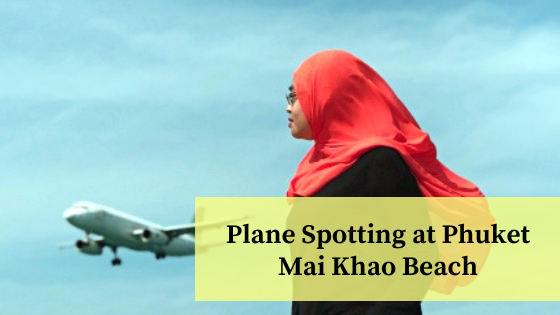 It was the second time for my husband and I to be in Phuket, Thailand together. We won a 2-night stay at Wyndham Grand Phuket Kalim Bay (again!) and thought it would be a nice getaway after our first anniversary – and reminiscing our honeymoon last year (ahem).

This time, we wanted to really experience our hotel (read: lazing in room and sleep till noon) so we didn’t have any itinerary planned except for plane spotting. Plane spotting at Phuket Mai Khao Beach seemed to be quite popular these days. We decided we wanted to check it out ourselves and try to get some good shots with the planes.

Getting To Mai Khao Beach For Plane Spotting

This was the tough part. You can find blogs on plane spotting at Phuket but once you touch down at Phuket Airport, not every taxi driver knows what you’re talking about or the best way to go there.

Our scenario was, upon touch down we would go from Phuket Airport – Mai Khao Beach – (driver will wait for 30 minutes) – Wyndham Grand Phuket Kalim Bay.

Upon arrival and picking up our luggage, we went from operator to operator to inquire if they would agree to our route. Some operators turned us down but most operators do agree with a bit of a price tag. The operators inside the Arrival Airport would charge us around THB 2000-2200. So, we decided to try our luck with the operators outside of the airport.

After asking around, we found one operator who was willing to charge us THB1650 (charges includes waiting time for 30 minutes). Grabcar charges are pretty much the same as the ones inside the Arrival Airport, and they might charge extra if they have to wait.

Another thing I noticed recently when I go to Thailand, transport operators would note that you’re a Muslim traveller and would usually provide a Muslim driver too. I assumed it’s to make the traveler feel more comfortable or maybe it would be another way to attract a return customer (e.g. the traveler would ask the driver to take him or her to a Muslim-friendly restaurant or Muslim-friendly places to visit, etc).

Our driver drove us about 15 minutes to Mai Khao Beach. If you view it on the map, the viewpoint is so nearby that if there was a “back door”, we could’ve just walked to the point in 10 minutes. Alas, plane spotting is no monkey business and airports has one of the tightest security in the world. So no “back door” there. Even a walk would take almost an hour so a taxi or grabcar ride is definitely the best choice!

When we arrived along Mai Khao Beach, the taxi was directed by a local authority to park nearby Coriacae Boutique Resort’s parking area. From there, we can either walk along beach on Splash Beach Resort’s walkway that would be about 10 minutes stroll or take one of the tuk-tuk’s that was waiting around Coriacae Boutique Resort’s parking to take us to the viewpoint. A tuk-tuk ride would take about 2-3 minutes but it also comes at a price: THB150.

We opted for the tuk-tuk.

When we arrived, there weren’t any plane landing at the Phuket International Airport so we took the time to really enjoy the view and the blue waters of Mai Khao Beach.

Oh, what a gorgeous sight!

We really enjoyed the porous white sand that are just so soft to the touch and walking along the beach as we waited for a plane for two to arrive. It was very easy to spot the planes too, the bright sunlight casting twinkles on the plane bodies as look out towards the horizon.

You can find some locals selling food or drinks nearby too but please make sure to throw plastic or any rubbish in it’s designated place. It is quite dangerous to have light items lying around when you’re nearby high powered engines and turbines – like the Airbus, for example.

My husband and I was only there for 30 minutes and we managed to spot Malaysia Airlines, Air Asia, Jetstar and Flyscoot.

Have you been plane spotting at Phuket Mai Khao Beach? What plane did you spot?

The best time for plane spotting at Phuket Mai Khao Beach would be from 10am – 2pm daily because during these hours, the sun are shining and it makes the beach sparkle and shine like blue diamonds.

Did you know that airplanes must face the wind when they take off and land?

Phuket International Airport is one of the busiest airports in Thailand with the capacity of 30 flights per hour (or more, in high season) so you can be sure to spot some really nice airplanes while you’re at Mai Khao Beach.

Mai Khao Beach is open for swimming as well so you can get a dip as you wait to take photos or videos with the plane of your choice.

Caution: Sound of jet engines can cause loss of hearing (especially for children) so do be cautious of your position or where you stand. Also, DO NOT leave light objects around the beach or nearby the fences as these items can be projected by the power of the aircraft turbines.