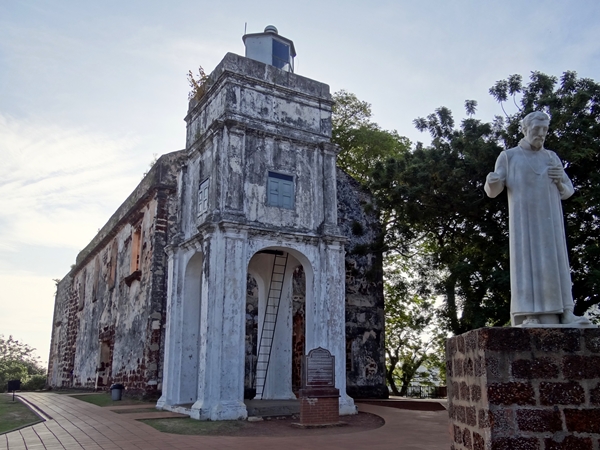 The history to this church is interesting. I love reading about the history of places whenever I visit them, especially the histories of old buildings or ancient architechtures. I think these old monuments are what help set the culture and style of a certain place in present day.

You can still find buildings that has been here since the occupation of the Portugese in Malacca and the St. Paul’s Church is one of them.

St. Paul’s Church was built in 1521 at the summit of St. Paul’s Hill, near the remains of the A Famosa, Malacca. It was built by a Portuguese fidalgo (nobleman) named Duarte Coelho. Coelho dedicated the church to the Virgin Mary and known as Nossa Senhora da Annunciada (Our Lady of Grace) whom he believed protected him during the rough journey of the South China Sea.

The St. Paul’s Church was first used for Christianity or originally Roman Catholic.

In 1556, the church was enlarged, adding a second-storey and a belfry tower in 1590. The church was also renamed as Igreja de Madre de Deus (Church of the Mother of God).

There is an open grave at the church, marked as a temporary burial place for St. Francis Xavier. He was buried in St. Paul’s Church for 9 months after he died at Shangchuan Island, China before his body is finally shipped to Goa.

When the Dutch conquerd Malacca in 1641 from the Portuguese, they used the church as a Dutch Reformed church which then was named as St. Paul’s Church. The Dutch Reformed was a reformed Christian denomination in the Netherlands. It developed during the Protestant Reformation.

The Dutch used the St. Paul’s Church as a High Church.

Final use of St. Paul’s Church

When the British took over Malacca in 1824, the British constructed a massive flagpole to fly the Union Jack and changed the name to Flaghill. However, the name did not stick and the flagpole was taken down.

St. Paul’s Church was later used as ammunition depot for strikes against Java. The church was unkempt and left to deteriorate.

There are Portuguese burial sites around the church. In 1924, some of the burial vault were uncovered. In 1930, more excavation was done. The tombstones were then scattered around the vicinity of the church or affixed to the walls of the church.

The St. Paul’s Church Malacca has now been turned into a museum of sorts. Visitors are able to walk the grounds of the church and read the tombstones affixed on the insides of the church walls as well as the tombs outside of the church. The church are maintained and kept clean at all times.

* Location : In The Ruins of St. Paul’s Church, Malacca

One thought on “The Ruins of St. Paul’s Church, Malacca”