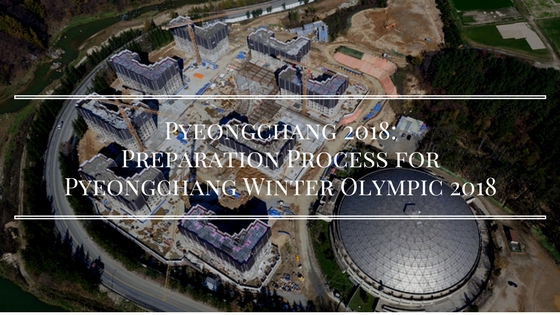 When a country wins a bid to host the next Olympic event, it is great news. But with great news, there is also a huge responsibility. Hosting for an Olympic event means you need to cater for a lot of needs. Not only will said country have to make sure that places for matches are safe and foolproof, the country also need to think for the visitors that will come for the Olympic games.

Even though Pyeongchang has been notified that it will be hosting the Winter Olympic 2018, it has already started preparation many years before that.

The Pyeongchang Winter Olympic 2018 are divided into building stadiums of two different areas:

There are 8 stadiums involved at the Pyeongchang Mountain Cluster location. Construction of the stadiums have been underway for a while now. But imagine constructions in the cold winter weather. Hopefully everything will be done and completed soon.

Pyeongchang Mountain Cluster has 8 stadium which are:

Apart from 8 of the Pyeongchang Mountain Cluster, there are 5 Gangneung Coastal Cluster that is undergoing construction too.

An Olympic event will not be complete if there are no supporters to the event, would it? It is estimated that at least 1 million people and supporters of participating teams will be visiting PyeongChang for the Winter Olympic 2018 event. That large numbers would require the proper transportation to help transfer the supporters to locations of the sports are held. The government of South Korea would also need to provide enough accommodation for the supporters to live in during the event.

How does PyeongChang fare thus far?

Isn’t the image above cool? 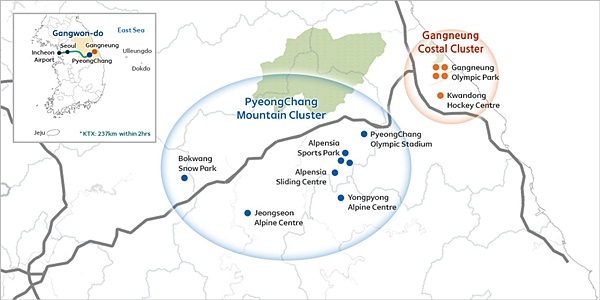 Did you also know that South Korea is building a new high speed train line that will be able to link Seoul to PyeongChang and take about 69 minutes only? If a person were to drive from Seoul to Pyeongchang, it would take about 2 1/2 hours.

It would be great to have easy access transportation for supporters who are staying in Seoul who would like to go check out their favourite sports or teams on specific days.

Not only that, with the train line complete, and even after the Pyeongchang Winter Olympic 2018 has successfully ended, the line will still be in use for tourists who would like to experience winter holidays or destinations in South Korea, similar to tourists who visits Japan in the winter.