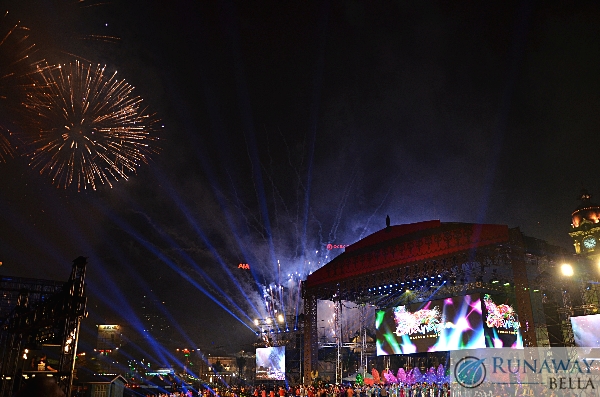 Since it’s inception in 1999, Citrawarna has been a part of Malaysia with it’s annual street parade in front of Merdeka Square or Dataran Merdeka. The colours, the music, the magic and the magnificence of Citrawarna was always something I look forward to every year. People from all over Kuala Lumpur and also other states of the country would come to Dataran Merdeka to witness the variety of parade brought by many organizations involved with Citrawarna.

According to Datuk Rashidi Hasbullah, Deputy Secretary-General of Tourism & Culture Ministry, programmes like Citrawarna is to promote Malaysia to the world as a tourism destination where we could offer different tourism products from different states through music, songs and dance.

This year however, Citrawarna 2015 took a twist from it’s norm and was brought to the visitors differently.

Opening Citrawarna 2015 on stage opposite the Sultan Abdul Samad Building, the musical MUD KL opened the show at around 8pm. MUD KL is a musical on the history of Kuala Lumpur (Lumpur is “mud” in English) and how the city was built back after the great fire and great flood. Another musical show performed was to showcase the “culture” of Malaysia, centering on the diversity of the people and enhancing on homestay business for tourists.

“Nature” boasted the different strengths each state in Malaysia could offer tourists, with beautiful forests, beaches, flora and fauna that would capture the attention of weary world travellers. The “future” theme, on the other hand brought 5 of Malaysia’s well-known fashion designers to showcase their futuristic fashion designs. Designers involved in the show were Rizman Ruzaini, Melinda Looi, Zery Zamri, Rubaq and Zang Toi.

Citrawarna 2015 was then ended with dancing along with the VVIPs on stage and fireworks to end the showcase at around 10.30pm.

However, another concert, “Konsert Tribute to Wings” started shortly after, much to the enthusiasm of the crowd.

Personally, I find Citrawarna 2015 lack lustre in comparison to past Citrawarna shows. I find the musicals not on-point or slightly off topic to the real objective of Citrawarna. Isn’t Citrawarna’s objective was to showcase Malaysia as a whole? Some of the costumes used for the musical were too “exposed” for a stage show, especially when audiences had to sit on the ground and look up to the dancers and performers. The dialogues used might not be understood by foreigners as the are too locally-tuned sometimes. Some of the fashion designs displayed was also too off-point for me, even though I know it is to align with the “future” theme, but it also should be on the basis of “Malaysia in the future”, instead of more “Western-ed Malaysia in the future”.

If Citrawarna are to be changed into a concert-like show instead of the usual parade like years before, then I think there are many room of improvements for future show directors to learn from.

This event was made possible by Gaya Travel Magazine for the Eat.Travel Write KL in conjunction with Citrawarna 2015