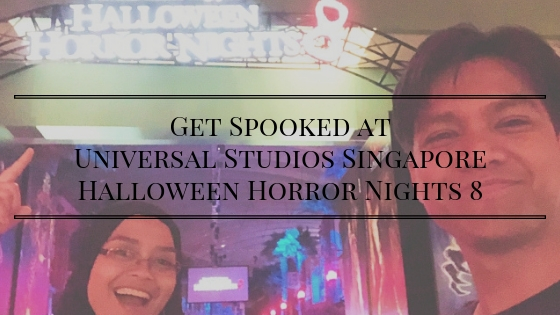 Halloween Horror Nights at Universal Studios Singapore first opened its doors in 2010. I have planned with friends and family members to experience this exciting and “spooky” theme park but never had the chance to do so until recently.

My husband and I have always enjoyed theme parks and we came to Singapore last October, especially for Universal Studios Singapore’s Halloween Horror Nights 8. Another main thing that attracted us to USS’s Halloween Horror Nights was this year’s new “Stranger Things” haunted house, because both of us are huge fans of the Netflix Series, Stranger Things.

It was just another regular day, USS opened at 10am for the regular theme-park-goers to enjoy its day rides but instead of closing its doors at 8pm like other days, for the month of Halloween, the park closes at 6pm. This is because it needed the one hour break time between 6pm-7pm to get ready for the night session of Halloween Horror Nights.

My husband and I were super excited and we queued near the entrance door with other teenagers (we almost forgot we weren’t teenagers anymore), anticipating for the night session. By 6.15pm, the number of theme-park-goers are starting to pile up, some with Halloween face tattoos, some wearing Halloween accessories and many with excitement on their faces.

As the doors open at 7pm, we quickly scanned our barcode at the entryway and headed for the center stage (this is where they showcase the haunted houses on the big screen and the “story” behind each haunted houses. The EDM music blaring on the speakers as we waited for the show to begin certainly catapulted me back to my “younger” days.

There are 5 different and rare haunted houses this year and they are:

The opening show at the center stage was certainly mind-blowing and pumped us up to hunt for other more awesome haunted houses, shows and rides.

Racing To Our Favourite Haunted Houses

Time is of the essence here. Just like the regular theme-park, the Halloween Horror Nights is only open at specific hours whch was from 7pm until 1am. If you’re like us and if you only purchase the regular Halloween Horror Nights 8 tickets, then you would have to plan carefully which haunted house you would like to go to for fear the queue would be long and you would just waste your time standing around instead of enjoying yourself.

As I wrote above, my husband and I were mostly looking forward to the Stranger Things Haunted House, so as soon as the opening show at the center stage was done and we were set free to roam USS, my husband and I ran straight to the Stranger Things Haunted House. We weren’t the only ones who did this – many others does the same thing too, running to their haunted house of choice.

After we completed the Stranger Things haunted house, we saw the long line for the house and were very grateful for deciding to run at the beginning because we realized that by then, the queue was piling up and it would take about 90 minutes to get into the house. This happens often at all other haunted houses as well so, if you’re a regular ticket holder, be smart!

What Else Can You Find At Universal Studios Singapore Halloween Horror Nights 8?

Apart from haunted houses, there are also shows that you can find at specific times in specific locations. The Scaremony can be found near the Hollywood Walk Of Fame while Dead Talks is in front of the Killuminati haunted house. Blood & Bones show is located right before Revenge Of The Mummy’s area.

There are Scare Zones as well. My favourite would be Cannibal scare zone near the Revenge Of The Mummy area. All of the cannibals were totally in character as we walked past them. I had one cannibal point a bow and arrow right in front of my face which was a little scary and he didn’t laugh one bit at my shocked face.

Some of the day rides are also open for visitors but they’re limited and made to suit the “haunted” theme. Rides that are open are:

If you’ve experienced these rides in the day, you might want to experience them at night too, especially the rollercoasters. The feeling is way different than in the day – maybe because it was darker and seemed more spooky.

One of the best things available at Halloween Horror Nights 8 is probably the Zombie Laser Tag, in my opinion. Although this game is priced separately but it sure is a lot of fun and different than the regular laser tags in town. It is much more fun when you do it with your group of friends and really bring the roof down killing all those zombies.

Last but not least, the beverages! Drinks might come in scary blood bags (alcoholic or non-alcoholic Jello), test tubes (non-alcoholic drinks with Toppings) and beakers. You can get Jellos in syringes or Evil Eyeball Cupcakes and many more.

Drinks of the photo above (from left to right):

And the drinks for photo above (from left to right) are:

Read more on the food and drinks available at Halloween Horror Nights 8 here.

Oh, and since we bought our Halloween Horror Nights 8 tickets from Klook, we also received a $15 food voucher (per ticket) to eat at any of the restaurants in USS. We went to Mel’s Dine-In since it has the Halal certification and enjoyed some charcoal burgers that night.

If you’ve never been to Universal Studios Singapore or USS’ Halloween Horror Nights, I would highly recommend you purchasing tickets to both the day and night theme parks and enjoy yourself to the max!

Also, make sure you bring some extra cash because some of the merchandises are Ah-May-Zinggg!