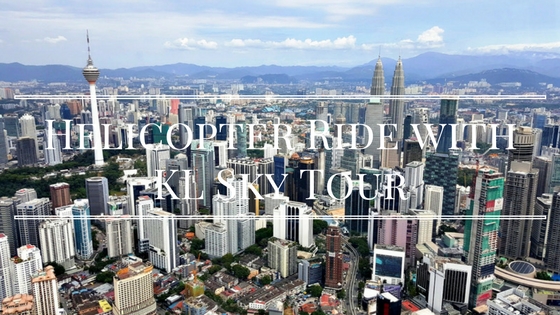 It was a clear morning when we arrived at Taman Tasik Titiwangsa, Kuala Lumpur for our helicopter ride. I had been here August last year for KL Sky Tour‘s soft launch but I did not get the chance to fly on that day. The queue was so long and I had other engagements to attend to.

This time, I was very lucky to be invited to fly with KL Sky Tour and since there were only 9 of us, we had ample time to lounge about, learn more on KL Sky Tour’s operations and we even witnessed a wedding proposal! 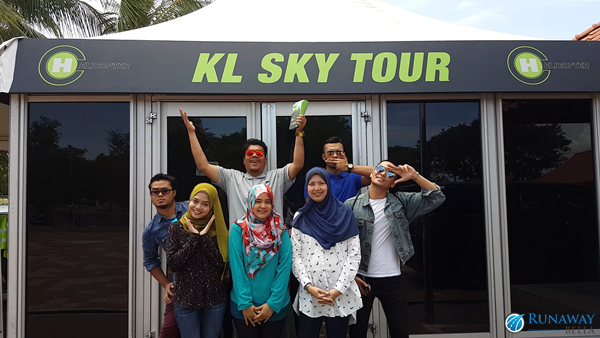 Located at the heliport of Taman Tasik Titiwangsa, Kuala Lumpur, the KL Sky Tour is open to public every day from 9.30am to 6.30pm daily. There are no night flies though, due to security reasons. Guests can walk-in any time for a tour or guests can also make appointment beforehand to avoid long waiting period.

KL Sky Tour in Taman Tasik Titiwangsa is not the only helicopter ride in operation by the company Cempaka Helicopters. Cempaka Helicopters has been in operation for many years and are established in other states as well, such as Penang, Langkawi, Terengganu and soon, Melaka. So you can be rest assured that the company knows what they’re dealing with.

The pilots are not locals and very well-experienced. Our Captain who flew us that day was Mr. Barry who apologized to us of the bumpy ride due to the strong wind. Yes, it was very windy on that day and since we rode the smaller sized Robinson R44, it was a little exciting as you feel the sudden hard shake when a strong gust of wind hit the side of the helicopter.

We only went for the 6 minutes ride which allowed us to see some of Kuala Lumpur’s finest from an aeriel point of view. We saw Kuala Lumpur’s popular attractions such as the Petronas Twin Towers (KLCC), KL Tower and other skyscrapers. We also saw the historical Merdeka Square, National Stadium and National Mosque. Not to mention some of Kuala Lumpur’s amazing heritage buildings like the Sultan Abdul Samad Building, Masjid Jamek and so much more.

Unless you plan to ride alone, the price are quite affordable if you share the ride with your other friends and split the price between you. The price schedule above is for flying with Robinson R44. Since the Robinson 66 can fit 4 people, the price is different and only available for charter or special events.

How would you like to be proposed after a scenic and romantic ride overlooking Kuala Lumpur City Centre?

On that same day, we managed to steal and share one couple’s memorable marriage proposal. However, this is not the common “boy ask girl to marry” proposal, but it was the other way around.

We were told that the lady has contacted KL Sky Tour prior to the ride to inform of her plan of proposing to her boyfriend. For that, KL Sky Tour prepared a mini board that wrote “Can I Be Your Mrs” and a bouquet of roses that myself and a friend ended up holding as the couple landed on the ground. She looked nervous when she proposed but he did smile and nodded before she ended putting on the ring on her boyfriend’s finger. Yes, it was all good and congratulations were in order as I passed the bouquet of flowers to the lovely couple.

So, if you plan to ask your lady love or partner for marriage after an exciting helicopter ride, do contact KL Sky Tour and the bouquet of roses will be yours, free of charge!